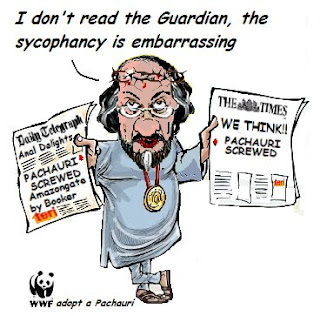 I suppose Moonbat was right, after a fashion. "Rajendra Pachauri innocent of financial misdealings but smears will continue," he wrote in a particularly idiotic piece which had his warmist claque all a twitter over the vile accusations that Booker and North had made about this saintly figure.

Well, the "smears" have continued, and leading the way is the Moonbat's spiritual home, The Guardian, with a headline "Rajendra Pachauri, head of UN climate change body, under pressure to resign".

The proximate cause of this apparent volte face is the report of the Inter-academy Council (113 pages PDF), helpfully summarised in a much shorter press release.

Nobody expected much from the Council, which has been looking at the IPCC and its procedures. And then head of the Pachauri fan club, the Hindustan Times, told us that "Pachauri escapes indictment". But it then added that the "embattled chief" of the IPCC, "escaped direct indictment in the UN’s review of his panel's assessments, only because he was not up for scrutiny personally."

There was enough in the panel's findings and recommendations, it goes on to say, "to suggest Pachauri runs a bad ship". The IPCC lacks transparency and, worst, "it relies on unsubstantiated scientific claims." Now, we may have made a point or two in that direction and while the Council only specifically mentions the "alarmist meltdown of the Himalayan glaciers" it quite clearly "errors" in the plural.

Multisource political news, world news, and entertainment news analysis by Newsy.com
The IPCC's slow and inadequate response to revelations of errors in the last assessment, as well as complaints that its leaders have gone beyond IPCC's mandate to be "policy relevant, not policy prescriptive" in their public comments, have made communications a critical issue, the report says. Pachy can no longer play his silly, self-serving games ... he has been exposed for what he is, all in the nicest possible way.

The Daily Mail, however, isn't quite as nice. It interprets the "scathing report" as calling for the IPCC "to avoid politics and stick instead to predictions based on solid science." The probe, it says, "took a thinly-veiled swipe at Rajendra Pachauri."

Watts Up With That has a welcome go, and reprints the NYT comments. This paper, which has had the hots for Rajendera ever since he became chairman, is now stating that the scientists involved in producing the IPCC reports "need to be more open to alternative views and more transparent about their own possible conflicts of interest".

Amusingly, one wonders whether this can apply to Pachauri. The BBC seems to think not. Editorial Complaints Unit has just upheld a complaint about the reference to this Pachauri as "the UN's top climate scientist".

A viewer complained that this was inaccurate and misleading, as Dr Pachauri's scientific qualifications and credentials were in a field unrelated to climate science. This had the ECU agreeing that the implication that he was a climate scientist was "materially misleading".

The Editor of BBC News at 10, we are told, is reiterating to his team "the importance of accuracy in the introduction of our contributors." But then, I suppose, to suggest that Pachy isn't a climate scientist is just another of those "smears" about which the Moonbat was so rightly concerned.

But more smears are on their way, it seems. Korea in October is the place and time. We may see the back of the old charlatan then.