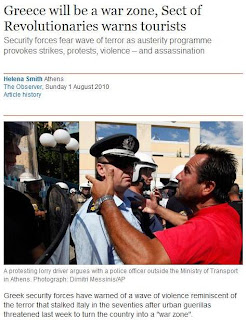 Greek security forces have warned of a wave of violence reminiscent of the terror that stalked Italy in the seventies after urban guerrillas threatened last week to turn the country into a "war zone".

"Greece has entered a new phase of political violence by anarchist-oriented organisations that are more murderous, dangerous, capable and nihilistic than ever before," says Athanasios Drougos, a defence and counter-terrorism analyst in Athens.

"For the first time we are seeing a nexus of terrorist and criminal activity," he said. "These groups don't care about collateral damage, innocent bystanders being killed in the process. They are very extreme."

The threats came from a guerrilla group called the Sect of Revolutionaries, as it claimed credit for the murder of Sokratis Giolas, an investigative journalist. Giolas was shot dead outside his Athenian home on 19 July, in front of his pregant wife.

One wonders whether our bubble-dwellers in the British establishment - and their happy little claqueurs - really think it could not happen here. And, when it does, therefore, not only will they be shocked, they will be mortified to find that the "extremists" have the support of the population, and they don't.

If you want a graphic lesson in what it takes to destroy a society, look to Greece, and then look closer to home. We are seeing the future being written.