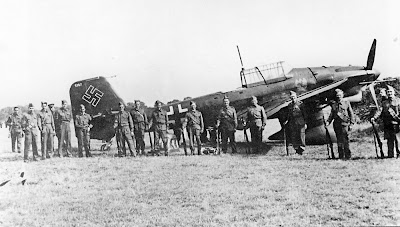 Mason, in his Battle over Britain, writes of this day that the scale and frequency of the German assaults - including the increasing use of the nerve-racking Stuka - engender "a new grimness in the character of the British".

The growing toll of enemy aircraft which fell over the English countryside, the increasing number of German airman bailing out amongst a population keyed up to meet an imminent invasion, the disruption of long-established amenities by enemy raids - all these pressures upon the English "now quite suddenly give birth to a startling and perhaps frightening atmosphere of hatred for the German people as a whole," he declares.

Read more on THE DAYS OF GLORY
Posted by Richard at 00:31