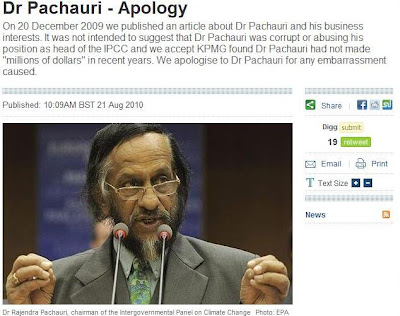 Readers of The Sunday Telegraph (hard copy and online) may be surprised to see what appears to be an apology in the current edition, relating to Rajendra Pachauri (illustrated above).

As far as the paper goes, however, it is actually a non-apology – as a careful study of the words will reveal to anyone with a modicum of intelligence (a dwindling band, one fears).

The text starts off by saying that we (i.e., The Sunday Telegraph) published an article about Pachauri and his business interests – as written by Booker and myself. Needless to say, the article was sound, all the substantive facts are correct and the paper stands by them.

However, this is not the name of the game. Pachauri wants an "apology", in so many words. The detail is irrelevant. All he wants is something he can tout around to his friends and supportive media, which he can project as a retraction.

Using the biggest crooks in the libel business, known to Private Eye readers as Carter Fuck, Pachauri has done a "no-win, no-fee" deal which, with a special insurance scheme introduced under the last administration, enables these sharks to go to law and stack up colossal fees. Recently, they represented a minor celebrity in a libel case, gaining £15,000 in damages – for which they then charged £350,000 costs.

The difficulty facing the paper is that, when having to deal with an unethical law firm which has been given a writ to stack up open-ended costs, going to law to fight even a good case can be perilous and expensive. Even a win stands to cost several hundred thousand pounds, in your own costs. If you lose, the costs can run to millions.

Faced with this blackmail, it is easier for the newspapers to give a "non-apology" and cut their losses. So far, Carter Fuck have stacked up £100,000 in costs and are seeking recovery from the paper. No damages have been claimed or offered, so the only financial beneficiaries are the lawyers

Booker and I might have intended to do so, and I certainly did on this blog – and more. I called the man a liar, and stand by that. But we are not the paper. And it is the paper that is taking the rap as the publisher. It "legalled" the piece and it was libel-proof, so much so that Carter Fuck has not sustained any of Pachauri's original complaint – dismissed as a "rant".

Nevertheless, these gold-diggers keep coming back, and back and back, each time stacking up the costs. To get rid of them, the paper can say that it "did not intend ... ", etc., without any problem. It neither intended nor did so in fact. It can also say, without a problem, that: "we accept KPMG found Dr Pachauri had not made 'millions of dollars' in recent years."

The paper can do so because KPMG "finding" that "Dr Pachauri had not made 'millions of dollars'" is a matter of fact. KPMG did so find. If you wish too believe that means Pachauri didn't make millions of dollars, that is your affair. But the crucial thing is that the paper has not apologised for accusing Pachauri of making millions of dollars. That accusation stands uncorrected. The paper simply accepts that KPMG has a claims in this respect.

So, the paper ends up making two statements of fact, on which basis it then "apologises" to Pachauri "for any embarrassment caused," an anodyne phrasing that does not even admit to having caused any embarrassment. This is pure, meaningless bullshit.

But the game is to play. Already the Pauchauri-supporting Hindustani Times has made its play. Thus you can see how the game actually works. And this sort of thing will go on for as long as the papers allow it – rolling over instead of fighting. If the papers got together and demanded a change of law, they would probably get it. This might even happen, as patience is running out.

In the meantime, Pachauri, his claque and the warmist fellow-travellers will be making hay. But if that is what they need to do to "prove" their case and protect their man, it tells you all you need to know about them. My only regret is that the lawyers are claiming about two hundred times more for stitching up the paper than I was paid for the piece. That should also tell you something.