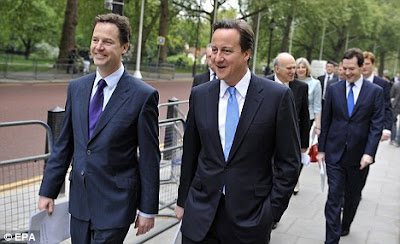 Booker this morning on the EU proposals to introduce a series of direct taxes.

You have to forgive the journalistic hyperbole, but it isn't the "ultimate surrender". It is just one more in a long line of surrenders. There are plenty more to come, as the political classes fall over themselves to give more powers to the Brussels machine, of which they are an integral part.

Harry Phibbs actually thinks that "Nations will turn Eurosceptic when pressed for hard cash", and will resist relieving the EU of the indignity of having to rattle the tin at the governments of the nation states. But as long as we have the slime illustrated above, that ain't going to happen.

But it was only yesterday that Mary Ellen Synon asked whether the British would tolerate it? Or would they let themselves be humiliated in a way that even the small ragtag population of 13 British colonies would not allow in 1776?

Sadly, the answer to both questions is probably "yes". As a collective, there are not enough of us even with sufficient balls to vote against the slime, much less rise up and send them to a better place. As a nation, we deserve what we get, I suppose.

But, until we get, at the very least, a referendum on the EU, there are no politics. Whatever the slime do - not interested. There is only one thing we want to hear.