What little we know 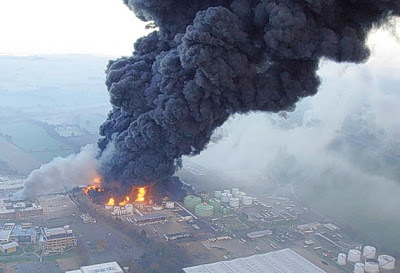 Most people will remember the Buncefield fuel storage depot explosion and fire of December 2005. It was rated to be the largest in peacetime Europe, involving eight million gallons, mainly of petrol and aviation fuel. Some three million gallons were lost. 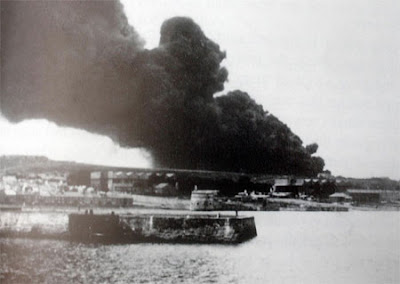 To my own shame, however, I had no idea where and when the biggest all-time (non-military) explosion and fire occurred, in Britain at least. This was actually started on 19 August, in the Admiralty oil tanks at Llanreath, Pembroke Dock. It became the largest "single-seat" fire the UK has ever known, consuming 33 million gallons of fuel oil and lasting three weeks before it was finally extinguished.

Recalled here, despite the bad weather on the 19th, round about 15:15hrs, two or maybe three Ju 88s bombed the depot. Two tanks received direct hits and eight tanks of the fifteen total exploded and burst into a flaming inferno.

Vernon Scott, a local journalist and author, described the immediate chaos nearby: "Shrieking mothers, some hysterical, were frantically looking for children" and terrified pigs fled squealing down Military Road. Firemen, soon on the scene, found "jet black smoke churning across the carriageway in such dense clouds it was impossible to see ... The blaze was creating a deafening roaring noise". Fire fighters had to "shield their faces from the scorching heat".

The embattled fire fighters started to bring the blaze under control by 00:30hrs on 20 August but another German aircraft bombed the site in the mid-afternoon. Two further attacks seem to have been made on the next day, at 01:40 hrs and again at 11:55hrs, with the fatal results for five Cardiff firemen. 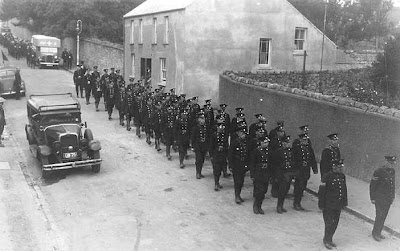 They were killed in an explosion which followed the bombing. After the send-off illustrated above, they were buried in Pembroke Municipal Cemetery (the "hearse" is the fire truck in the distance, after the cortège).

Twenty-eight are also injured. The fire rages through the dock area, destroying 11 of the 17 oil tanks before finally being brought under control. For a fortnight, the towering pall of black smoke could be seen for 100 miles around.

The late Pembrokeshire historian Vernon Scott, who wrote two books about the attacks on Pembroke Dock (now sadly out of print), said people in the town have never had the credit they deserved for enduring such hardship during the war. "For a town of its size – it had a population of 10,000 – Pembroke was one of the most heavily bombed communities in the British Isles during World War II," he said.

The 70th anniversary of these events was a good opportunity to make amends for omissions brought about by wartime censorship and the indifference of subsequent commentators and historians. Forgive me if I indulge an obsession and do precisely that.

COMMENT: Battle of Britain thread
Posted by Richard at 00:34