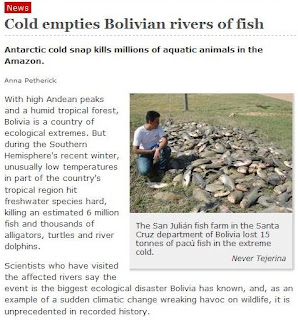 Nature magazine has finally noticed the unusual coldness of the southern hemisphere. And, with absolute, dreary predictability, it's climate change as "Cold empties Bolivian rivers of fish" and "Antarctic cold snap kills millions of aquatic animals in the Amazon."

At first it was funny ... whether it was hot, cold, wet, dry, windy, calm, it was always climate change. How lucky for the warmists that, at a very early stage, they dumped "global warming" in favour of this catch-all.

Frankly, though, it is now just boring. These people have nothing new to say, offer nothing of any interest and know nothing that matters. Their narrow, one-dimensional world view would be comedic if it wasn't so damn boring – not least the vitriol they pour out to anyone who has the temerity to disagree with them.

That is what is going to destroy their little game ... not the science, but the sheer boredom of it all. Climate change is boring, boring boring. Get a life people!

But the fact of a cold southern hemisphere is a little concerning. It was like that last year, and we had a cold winter. We've has the heating on here three time this month already, once during the day, it's been so cold – in August damn it! The signs are, therefore, that we could be looking at another cold winter.

But hey! That's climate change! Except that your average Joe will be telling the warmists to put it in their pipes and smoke it – or something to that effect. And when the Cleggerons have finished messing with the energy supply and the lights go off, we'll have to burn warmists to keep ourselves warm.