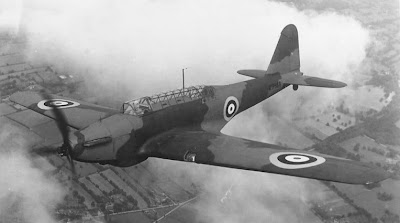 A Fairey Battle Mark 3 L5110 of No. 253 Squadron en route from Northolt to Turnhouse suffered an engine fire and then engine failure as it flew over Tanfield at about 19.00hrs. The aircraft crashed just to the NW of Causey. The crew, Sgt J A Anderson and LAC Ricks, baled out and landed on Gibside Estate; both were injured and were taken to Rowlands Gill.

The full story of this crash only emerged much later. Sergeant Anderson - known as "Andy" to his friends -  had exhibited great bravery. The Squadron had been given two old Battles for hack work and target practice, and one day one of them, burst into flames.

DAYS OF GLORY
Posted by Richard at 23:52