A serious blow to its credibility 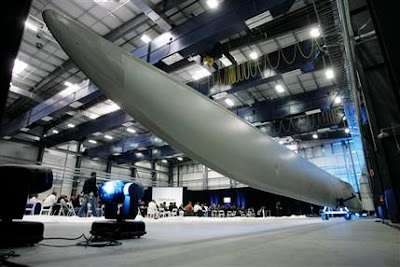 With some element of hilarity, we note that the photograph of a wind turbine factory, chosen to illustrate the plight of Vesta Wind Systems, accompanies an article headed: "Green Job Growth Outpacing Other Industries".

The same factory, which so proudly heralded this news now accompanies a report headed: "Vestas Plunges as Wind-Turbine Maker Cuts Forecasts Blaming Delayed Orders". The company which manufactures the blade illustrated lost almost a quarter of its value in Copenhagen trading after reporting a larger-than-expected loss and cut forecasts. It blames "delayed orders."

At a time when this greenie firm should be enjoying strengthening demand and multiplying profits, it has instead suffered its biggest one-day drop in its share price since November 2002 after posting a second-quarter loss of €119 million. And what makes this particularly significant is that the average estimate, from a survey of 15 analysts was a €7.3 million loss.

"Right now it's just a shock, and Vestas has suffered a serious blow to its credibility," says Teea Reijonen, a London-based analyst with Royal Bank of Scotland Group Plc. "Analysts are going to take a very dim view of margins for 2011 given what’s happened this year."

Vesta has now cut its sales forecast for this year to €6 billion from €7 billion on delays in expected orders in the US, Spain and Germany. The credit crisis has prompted banks to restrict loans to wind-park developers that buy turbines from Vestas and its competitors. Not yet has the bubble burst, though, as the company is still talking about delays. And the company has signed at least eight orders the past month, including its biggest ever in the US and its largest in Australia.

There are still some mugs around, and still too much money in this game ... but the writing looks as if it could be on the wall.