A breach in the dam 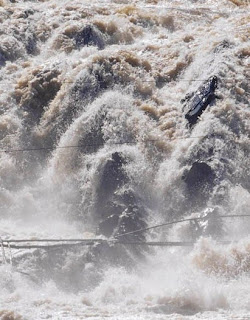 Something which is finally going to blow apart the vile construct that is the European Union is just beginning to emerge.

This is the news, offered fairly low-key at the moment, that EU member states are exploiting passport loopholes that potentially give nearly five million outsiders, mostly from Europe's poorest countries, the coveted right to live and work in the EU.

And, of course, once they are inside the EU borders, they have freedom of movement and, eventually, unrestricted freedom of establishment. This means they can come over here and sponge off the over-generous welfare system which seems to favour immigrants above all else.

Now this is being given the Daily Mail treatment, and it is obvious that The Boy can do absolutely nothing about it, for all the bleating about immigration, the brown sticky stuff will be flying off the rotating air movement device in industrial quantities.

At the heart of this scam, which is making a complete mockery of our immigration policy – more so than it already has – are two countries, Romania and Bulgaria. They are handing out passports to ethnically linked groups or minorities outside their borders. Now Hungary plans to do the same, as of January.

The main beneficiaries are citizens of Moldova, Macedonia, Serbia, Ukraine and Turkey - about 4.7 million people with living standards at a fraction of the EU average. All are eligible for EU citizenship under passport giveaway programs.

And it gets worse. Others outside Europe, looking to escape hardship at home, are also lining up. Spain enacted legislation in January 2009 giving even the grandchildren of Spaniards whose ancestors left due to political or economic hardship caused by the Civil War the right to obtain passports from Madrid - and the response has been huge.

Spanish foreign ministry figures from January indicate that over the first full year of the law, there were 161,463 applications - 95 percent from Latin American countries. So far, 81,715 have been granted.

Total Latin American numbers are unavailable - but the Spanish foreign ministry has extended the window for applications by another year to December 2011, due to what it calls "overwhelming demand."

In Cuba alone, nearly 82,000 people have applied for Spanish citizenship and 36,415 have received it as of 30 June, clearing the way for the lengthy and expensive process of obtaining permission to travel abroad - or leave permanently. Venezuela's Spanish consulate has handed out more than 35,000 passports so far this year.

The number of Mexicans who could qualify is uknown, but 150,000 are estimated to be eligible. Of those, more than 14,000 people have been given Spanish citizenship and huge lines of passport-seekers form every day.

Effectively, millions worldwide are eligible for EU passports, and in the world of the have-nots, getting a passport and welfare rights in the EU is like winning the lottery.

Basically, as this rolls out, and the world's poor come flocking to the EU, their hands extended and their welfare eligibilities worked out well in advance, we are completely and truly stuffed. If ever there was an application for the word "sustainable", as in "unsustainable", it is our continued membership of the EU.

These bloody fools have started something they don't even begin to know how to control. With stresses already building up an indigenous population which has been abused and ignored by the politicians, the backlash will make the BNP look like moderates and Powell's "rivers of blood" speech sound like a description of a Sunday school outing.

Even now, they do not have the first idea of what is coming their way. But then, when a dam breaches, there is often little warning. At the first sign of a crack, therefore, it is wise to run. And the crack is showing ... après moi le deluge.