A scam on hold – and another one behind 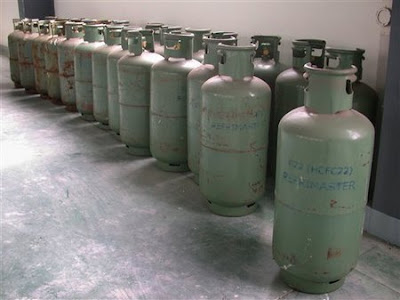 The UN's CDM Executive Body is to review a request from a Chinese plant destroying HCF-23 to generate carbon credits. This follows on from its action in blocking four similar requests "in a bid to ensure that the plants do not deliberately boost their greenhouse gas emissions" – exactly the scam we discussed in December 2009 and again last June.

The Chinese plants are requesting millions of Certified Emissions Reduction Units (CERs) for destroying HCF-23, a potent greenhouse gas that is a by-product of manufacturing the refrigerant gas HCF-22. The credits are generated under the Clean Development Mechanism (CDM), which "allows" industrialised countries to offset a part of their emissions by funding reductions in developing countries.

The whole thing, as we explained in our earlier pieces, is a gigantic multi-million dollar scam. Furthermore, it has been going on for years, ignored by the greenies over here and especially the media. And even now, the World Bank is seeking to defend the indefensible.

Its involvement here is interesting, accused by CDM watch of "defending its investments", illustrating precisely the conflict which occurs when financial institutions get mixed up with environmentalism. And it is the same World Bank which is so interested in REDD, that even The Observer is concerned about - but is otherwise being ignored.

Actually, the reality is not millions and billions, but billions and trillions, as this headline makes clear, putting the current market at $2.7 billion. At least the Philipine Star is on the ball, which really does tell you so much, when it seems to be the only journal which is currently covering the issue.