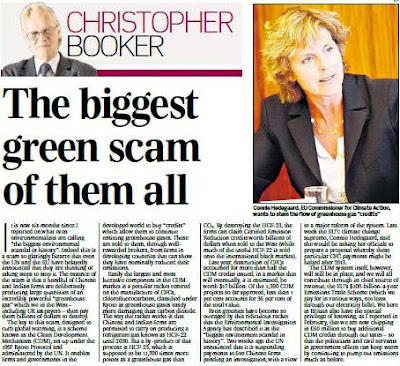 The slime who pretend to be environmentalists, pouring out their venom at anyone who has the temerity to disagree with them, might garner a little credibility if they ever expressed some concern about the great CFC scam.

Booker has picked it up again in his column, noting that even [some] greenies have become so outraged by this ridiculous racket that the Environmental Investigation Agency has described it as the "biggest environment scandal in history".

Yet Monbiot and his claque, who are so strident in support of the likes of Pachauri who actually helped devise the obscene system which gives rise to this scam, are strangely silent when it comes to an abuse which has been going on for years.

These people are not environmentalists – they know nothing of and care nothing for the environment, and would accept any abuse if it fits in with their belief system. There is no real description for these people. They are the dregs, more so for their hypocrisy in pretending to care for something that they are actually helping to destroy.