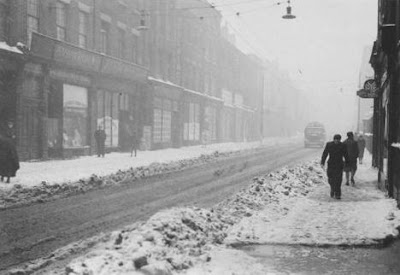 The Daily Mail is amongst the many newspapers remarking about the sudden turn of bad weather. Remember those balmy days back in June?" it asks us, then telling us to cherish the memory. With the holiday season in full swing, what remains of the summer seems likely to be washed away.

Large parts of the country were braced for a deluge last night as forecasters issued a severe weather warning for heavy rain and flash flooding. As much as 3in of rain was predicted across southern England, East Anglia and the southern Midlands, falling on saturated ground and raising the likelihood of flash floods.

Of course, the warmists will be quivering with delight at the prospect, able once again to tell us that this "peculiar" weather is yet more evidence of global warming. But this is not so.

One of the delights of doing the current narrative on the Battle of Britain is that each day, 70 years ago, I have access to comprehensive weather reports. And, solidly from 19-23 August, there was a run of bad weather, with heavy rain, which virtually shut down the air war. The summer of 1940, contrary to myth was far from good. Only the Indian summer through September redeemed it.

Interestingly, we would know more about the weather in 1940 then the people at the time. Weather forecasts were state secrets and the media was prohibited from publishing them, or referring to the weather for the past ten days. It was felt that this would give too much information to the Luftwaffe.

However, when the Germans had invaded France and were sitting in Calais 21 miles from England, it was pointed out that it was a bit stupid prohibiting any mention of the weather there, as all the Germans had to do was look out of their windows.

A compromise was eventually reached, with the media allowed to mention the weather in the Channel but nowhere else. Historians not in the know may be puzzled at the inordinate interest taken by the population at the time in the weather conditions in the Channel.

But then, it was a question of it raining in the Channel – and nowhere else. The previous January, there had been record cold snap, and the censor had to give a special dispensation to allow the media even to mention that fact. The publication of photographs (such as this street scene in Liverpool in January 1940) was not permitted until after the war.

Nothing ever changes, it seems, except that now the media does not publish voluntarily, because the material does not suit the warmist agenda.