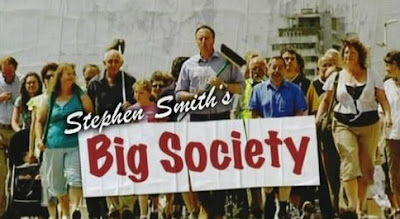 Employers have been warned that unpaid internships could break the law, says The Daily Telegraph.

According to the Institute for Public Policy Research (IPPR) and campaign group Internocracy, employers are almost certainly breaking the law when they take on unpaid interns. They should be giving them wages if they work. They are mistaken in believing that they are allowed to take on unpaid interns as long as both sides know it is a voluntary position.

"Private companies will normally be under a legal obligation to treat people employed on internship programmes as workers and to pay them the appropriate minimum wage," says the report by Kayte Lawton, a research fellow at IPPR and Dominic Potter, director of Internocracy.

Now, although not stated (surprise, surprise), this has a strong EU dimension. We are talking about equal treatment, and that is covered by the EU's Employment Directive.

That basically stuffs The Boy's "Big Society", which majors on " a new volunteering programme to help 16 year olds develop their skills, mix with people from different backgrounds and get involved in improving their communities".

Mr Cameron can only do what the EU lets him do. He knows that the EU is really in charge and his is just the front man. And if his masters say volunteering - i.e., unpaid labour - is out, then that's an end to the matter. The problem he has is that people are beginning to notice.

When the Tories fought the general election, says Melanie Phillips, they promised they would yield no more power to the European Union, and that they would even seek to regain from the EU some of the powers that Britain had already lost.

These pledges were designed to take the sting out of the fact that they were not, after all, going to offer a referendum on the European constitution.

Three months on, it looks increasingly as if none of their promises to safeguard British power is going to be kept. Indeed, the coalition administration even seems to be going in precisely the opposite direction.

This can hardly be a surprise.