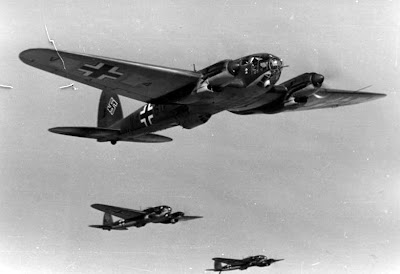 The weather finally cleared, sufficient to permit a relatively high level of air operations, although a morning haze delayed flying in some areas. It did not stop an early raid on Great Yarmouth, though. Missed by radar, it was picked up by the Observer Corps but too late for any effective interception. The force dumped about 20 HE bombs west of the harbour, affecting public services for a while. By the time a section of No. 66 Sqn Spitfires got there from Coltishall, the raiders were long gone.

Shortly afterwards, two forces of some strength were detected building up behind Cap Gris Nez. Squadrons were acrambled to protect the forward airfields. By 08:15hrs the forces were being tacked as they crossed the Channel, by which time more forces were building up, although these showed no indications that they were about to follow. Nevertheless, more RAF squadrons were sent aloft, building the defending force to six squadrons and two flights.

Read more on THE DAYS OF GLORY
Posted by Richard at 23:03