Not in the least surprised 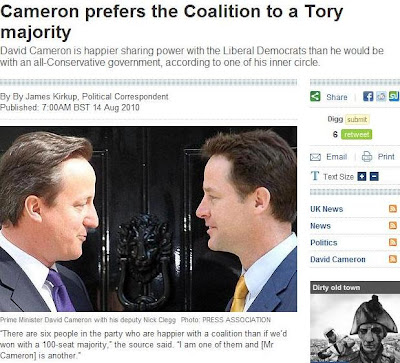 David Cameron is happier sharing power with the Liberal Democrats than he would be with an all-Conservative government, according to "one of his inner circle".

If this is true, and it could very well be, it sort of confirms a lot of what we have been saying – the man is not a Conservative, never has been and never will be. It is hardly surprising, therefore, that he would be more at home with his own kind in the Lib-Dims than with a Tory majority.

What is surprising is that so many Tories fell for this imposter – but then the Tory Party always has been known as the "stupid party". It really has. This is not something we've invented. Now they're stuck with him, having to pretend they like it, that this is what they wanted all along.

Frankly, we have no sympathy at all. They chose him, they supported him and they fought for him. They deserve everything they get. I don't know about you, though, but I don't. I don't accept the man as my prime minister. I don't even think of him in those terms. He is an imposter and the sooner we are rid of him the better.