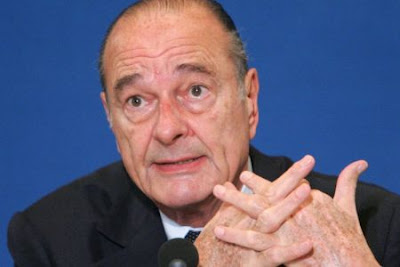 It seems almost another age when we were railing about the crookery of the French president, Chirac, who had been dubbed even by his own citizens as L'escroc. And indeed it has been some time since we last looked at him.

But all good things have to come to an end. Today we see confirmation from the city of Paris that Chirac and France's ruling UMP party will pay the city € 2.2 million euros to drop its fraud charges against the former president. €550,000 euros of the fine is to be paid by Chirac while the remaining €1.65 is to be paid by party of current President Nicolas Sarkozy.

The "reimbursement" relates to the thievery on a grand scale by Chirac and party, not least creating contracts for ghost jobs between 1977 and 1995 when he was the mayor of Paris, rewarding his political allies with the contracts. Rather than be up front about it, the current deal is a hole-in-the-corner affair, only recently uncovered by journalists. And the response from Chirac is entirely typical. He denies any wrongdoing.

"President Jacques Chirac has always denied having committed any crime whatsoever and maintains that the jobs at issue were legitimate and useful to the city of Paris and to Parisians," says Chirac's lawyer, Jean Veil.
"In order to remove a source of controversy harmful to the citizens of Paris… [ Chirac] hoped for an end to the civil litigation and that the city of Paris would simply be reimbursed for the money it sought to recoup through legal means."

It cannot be possible that even Chirac believes this level of bullshit, but the fact that his spokesman could bring himself to utter it tells you so very much about the ruling elites and their total contempt for the public.

Interestingly, there has been very little interest in the affair from the British media. There rarely is, despite the fact that the French government, quite evidently floating on a sea of corruption, is part of our own government through the mechanism of the European Union.

Despite this, one would like to think that our own government is free from taint but, given the machinations of president Blair. But this is extremely unlikely. We just do our corruption a different way over here, while our etiolated media concentrates on the fluff and trivia.

However, it is not yet over for Chirac. There is another corruption case scheduled to go to court for this autumn. The only real issue, though, is how this crook is once again going to evade justice.

Not once, though, is any thought given to the corrosive effect on public morality. If our leaders are "bent", and they are able to get away with the most henious crimes (and sharp practice), there is no premium in playing it straight.

More so than ever, it becomes a society where the elites simply grab what they can get, and a weary cynicism takes hold of the population. That is where we're at on this blog. For so many years, we have charted corruption, stupidity, incompetence and the rest, charting only a tiny fraction of what is going on.

The one constant, though, is that real crooks get away with it. The bigger the crooks, the more likely that is. And if there is one thing different from the past - as it was ever thuis - it is that occasionally the population used to rise up and slaughter their oppressors.

This is why this rich vein of historical allusion runs through this blog. I don't believe human nature has changed all that much. The elites can piss-take for so long, and then nature takes its course. It would be nice to see the French population take a lead, but I suspect they won't. Someone will though - you can bank on it.