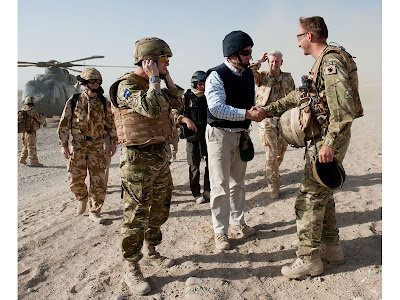 Like busses - where you hang around for ages and then not one but two turn up – so it is, it seems, with helicopter stories, this being the second in succession.

This, though, is not really a helicopter story. It is more a political story which happens to involve helicopters. And more than anything, it illustrates the duplicity of politicians, their willingness to use the military to score political points and, in particular the loathsome duplicity of the Cleggerons.

In the frame here is Nick Harvey, the Cleggeron armed forces minister in what laughingly passes for a government. This is the Nick Harvey who, through the tenure of the last Labour administration, was highly critical of the shortage of helicopters made available to our troops in Afghanistan.

And, even when Gordon Brown – as legend would have it – relaxed the purse strings and allowed the military in December 2009to order 22 new Chinooks, Mr Harvey was still highly critical, condemning the "slow response" to the helicopter shortage as "shameful".

But now, this self-same politician who thought the delay so "shameful" has been speaking to the Western Daily Press. And, guess what. Mr Harvey has revealed that the order is now "in the melting pot" of the October strategic defence review. The "government" may decide to scrap the contract altogether.

An order of vital Chinook helicopters earmarked to help keep troops off the ground and clear of improvised explosive devices in deadly parts of Afghanistan may be shelved in MoD spending cuts.

One of the things influencing little Nicky is the realisation that British troops have been sharing the use of US aircraft in Afghanistan, which has helped ease the pressure.

"One thing that did impress me on my last visit to Afghanistan a few weeks ago," he says (where he was happily flown around in an RAF helicopter – pictured) "was the American commander telling me the coalition forces use the helicopters like a bit of a taxi rank".

This, adds our new minister, "compensates the need for more helicopters somewhat, in that people are just jumping in and using what is available from the coalition forces."

Interestingly enough, that was exactly the system which prevailed when Harvey was screaming for more helicopters for "Our Boys" – except that this did not seem to make any difference when Labour was involved.

But now Mr Harvey is at the helm, all of a sudden, new helicopters are no longer so important and it is quite alright for the Septics to supply them, as they have been doing all along – together with most of the airpower.

Funny old world, politics – but even "funnier" is the media which has been remarkably reluctant to highlight this volte face, even though it was screaming blue murder at what it perceived to be Labour's "dereliction". But then, the Cleggeron agenda of stuffing our armed forces isn't on their agenda – yet.