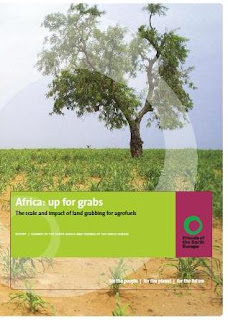 In a new report, Friends of the Earth Europe is crying foul about the production of biofuels, claiming it is leading to a land grab in Africa.

In the best patronising style of the liberal neo-colonialists, it thinks the niggers should be using the land to grow subsistence crops instead of generating economic activity on the backs of gullible Europeans, which can then be taxed and used to foster independence from whitey and his NGOs (like Friends of the Earth).

As much to the point, the greenies and their supporters see better revenue earning opportunities in REDD, where they can turn the forests of Africa into carbon credits, freezing economic development and making the nigger totally dependent on whitey and his NGOs.

Thus, the report is far from what it seems. The very fact that it is produced by Friends of the Earth Europe – a publicly-funded body, heavily supported by the EU, tells you there is an agenda here.

But it also gets additional support from the EU Commission, the Sigrid Rausing Trust, the Isvara Foundation, a rather dubious German Catholic agency called MISEREOR and an advocacy group called GRAIN. The Netzwerk Africa-Deutschland and Markus Bier (a geographer from the University of Aachen) are also in there, plus Greenpeace.

This is an interesting if not untypical mix – the EU, Christian evangelicals, largely German greens and academia. These are the new colonists, spreading the word in the name of their religion of neo-environmentalism.

But it also shows up the stresses within the EU, where the German green faction is seeking to frustrate EU policy. As we get more of this, we will see the EU tearing itself apart with its own money (our money). The creed has nowhere to go but down.