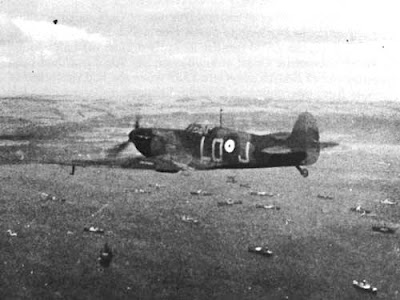 A convoy off Cromer is attacked – a detail that makes it into few chronological narratives on a day that was widely regarded as "quiet". The convoy is probably FS 244 – six vessels on the run that stretches from Methil, the sheltered anchorage in Largo Bay in the Forth Estuary, all the way to Southend. This one is due on 8 August. From there, the vessels will either join another convoy or make their way independently to the Port of London, or another destination close by.

Sometimes the convoys start on the Tyne, as this one did – most having done so from September 1939 up to the end of August 1940. From then onwards, the starting point is Largo Bay, watched over by the RAF as it becomes a prime target for the Luftwaffe (pictured, a No. 602 Sqn Spitfire on patrol over the bay).

Read more on DAYS OF GLORY
Posted by Richard at 23:27