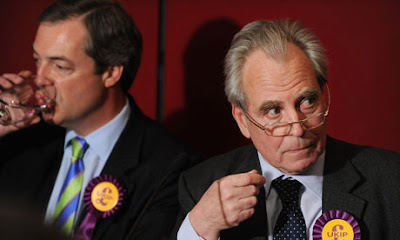 In the life of any political party, a change of leader is always a milestone – even if some are bigger than others. And we have just seen "one of they", with the resignation of The Lord Pearson as leader of UKIP because, in his own words, he is "not much good at party politics".

At least one must applaud Pearson as a man of honesty and good sense – in this department at least. It is also a wise man who knows his limitations and acts accordingly.

Pearson will be best remembered (by some) as a leader who, during the general election, went out to bat for the other side – much to the dismay and distress of the UKIP candidates who had invested huge amounts of their own money in their campaigns.

Where this now leaves UKIP is anyone's guess. Farage has not ruled out returning as leader and, given the dross left in the higher reaches of the party, he is still able to stand head and shoulder above his own internal opposition and look the best bet.

That, in fact is a measure of both Farage's success and his failure. His success is evident, in turning UKIP into a one-man party and his own personal cash cow. That he has driven out so many people and is left as the only person with any credibility as leader is the other side of the same coin.

That Pearson should now depart, therefore, is undoubtedly a milestone, but the fear is that it is also the tombstone – for Euroscepticism. There should be no rejoicing in the establishment though – the replacement will be something they like even less.