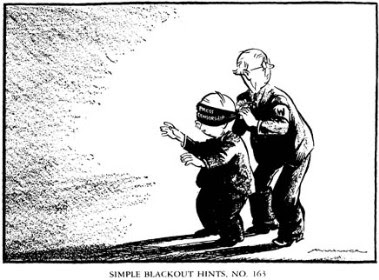 Slightly out of sync with the posts. I seem to have fallen into a new rhythm of starting the piece on the day, but finishing it on the next, thus keeping two days on the go at the same time.

Thus, I have finished Day 32. I'm quite pleased with this one – it was difficult to write, but it came together quite nicely. I touch on censorship and propaganda issues - hence the cartoon, taken from the piece (the wording on the blindfold reads "press censorship").

I've made a good start on Day 33, but have a lot more to do, especially with the illustration.

Today I'll make a start on Day 34 and, as always, I'll be adding to previous posts and working on the "backgrounders", with a little help – there are a few in the making.

In between wishing I hadn't started this, I'm privately wondering whether I have the stamina to finish, but it's turning out to be such a fascinating project that I would have difficulty walking away from it.

Battle of Britain thread
Posted by Richard at 00:58