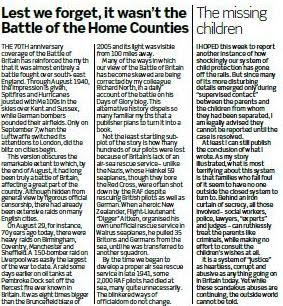 Booker has done a short piece on The Battle of Britain today, reminding people (those who need it) that it was a battle of the whole of Britain, and not just London and the Home Counties – with a "walk-on part" for the people of Coventry.

The piece is not as I would have preferred it but we had to cobble it together at the very last minute – literally in the wee small hours – after Booker had been told by the lawyers that the paper could not publish his piece on the "missing children".

Nevertheless, the point is made and will be made more forcibly in times to come. Over the last weeks I have been in touch with several regional authors, historians and publishers who have been involved in some way or another with charting the parts their localities had to play in the battle. And they are all of a mind that the account of the battle is far too London-centric.

Part of that is understandable. As I have remarked, very often the censor refused to allow the names of places outside London, hit by bombs, to be named. Further, given the rationing of newsprint and the limited avenues for publicity, many incidents were not centrally recorded. Until very much later when they were unearthed by local researchers, many simply do not exist on the record.

And then, of course, there is the propaganda element – nowadays it is called lying. For instance, officially, it was policy to talk down the effects of bombing raids. The Pembroke raid is a good example. Researchers unaware of this, and who take contemporary news accounts at face value, are likely to be gravely misled.

Then, in propaganda films and newsreels (if there is a difference) it became common to build clips out of several completely unrelated sequences, so much so that I have a clip purporting to be a single sequence, but is in fact a composite where the events shown are more than two years apart.

What is so very different now is that, with the growth and ease of self-publishing and of the internet (the two very much related), information which would have been inaccessible – or take inordinate time to research – is now increasingly there for the asking.

My problem is that, if you start collecting these data centrally – which does not seem to have been done – you start to get a completely different picture from the one painted by some of the classic textbooks.

By now, as you might imagine, I have built up a considerable library of standard texts on the battle – to add to my already fairly extensive library. But far from making things easier, some of the accounts make you really wonder. At times you being to think that they are describing not only a different battle as a different war. Then, cross-referencing different accounts, and you wonder whether the different authors were in the same war.

Add to that, some of the material and the detail is just plain wrong. I thought by now that some of the detail would be settled and could be taken as read, but at you get in deeper, you discover where the short-cuts have been made. A lot of the records, even on our own side, do not exist, and there has been reliance on second-hand accounts from witnesses, and some guesses, which are simply fiction.

Thus, although thousands of books have been written about the subject (Amazon lists over 5,000 which cover some or other aspects), the definitive textbook has yet to be written. Probably, it cannot be.

But of one thing I am certain, it was not how it is currently painted, not least because no one at the time actually knew it was the battle of Britain. The Battle of Britain as a "brand" was not, in fact, invented until the following year, based partly on deliberately constructed myths that have persevered to this day. And, while we need our myths, we also owe ourselves the truth. Booker made a small start today.

COMMENT: Battle of Britain thread
Posted by Richard at 17:19