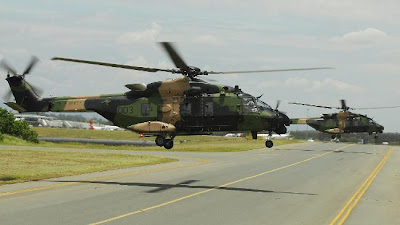 Saddled as we are with the plastic A400M, that even Airbus is getting a little worried about, we can take some small comfort from the experience of the Australian military which have made the rather expensive mistake of buying European-built helicopters.

This is the MRH-90 helicopter (pictured), a fleet of which has cost the Australian taxpayers $4 billion, and which was recently grounded after serious engine problems were discovered.

Now, another snag has been spotted, after an MRH-90 helicopter on a routine flight from Brisbane to Townsville on Saturday was grounded at Mackay airport.During a post-flight ground inspection, the crew noticed scratches on the engine intake and closer inspection found evidence of internal damage from a foreign object being sucked in to the power plant.

A decision was taken to replace the engine and an inspection will be carried out by the manufacturer Rolls-Royce Turbomeca to establish the exact cause of the damage. However, in the wake of that failure, all MRH-90 engines must be inspected every five hours of operation.

In a military helicopter, such a brief interval for engine inspection is unprecedented and it effectively makes the machines unusable for operational purposes. Such a defect would hardly bother the Europeans, who do not actually believe in using military hardware – but it might cramp the style of the Aussies, who still have some pretentions to being a serious military power.

But then, if they insist on buying Eurotrash, they rather get what they deserve.