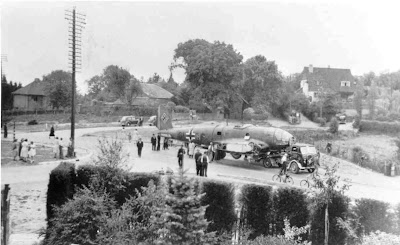 A frontal system is moving in from the Atlantic, across the British Isles and into Europe. The bad weather that closed down operations in the early evening yesterday is going to dominate for some days. There is going to be no serious flying for a while. Stocktaking and retrenchment was in order while the civilians clear up the mess on the battlefield.

The picture above is interesting in this context. An HE 111 from KG55, it was shot down on 16 August during the attack on Feltham, near London. Gunfire from Sqn Ldr Pemberton's No. 1 Sqn Hurricane damaged the oil cooling system causing failure of the engines. The pilot, Ob Wilhelm Wieland, brought the Heinkel down to a good landing at Annington Farm in Bramber, Sussex.

Gordon James took this photo at Oakhill, Bursledon, Hampshire, as the remains were transported to a scrapyard. It was against the law to take such photos, so Mr James kept his camera hidden until after the war, when he finally had the film developed.

Read more on THE DAYS OF GLORY
Posted by Richard at 23:31