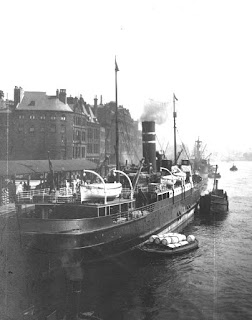 The news of the day was the Hull registered steamer Highlander (1,220grt - pictured, pre-war at the quayside in Newcastle), under her master, Captain William Giflord, which steamed into Leith harbour with parts of a Heinkel 115 seaplane draped across her stern.

The ship had just survived a bombing attack and downed at least two of these machines, returning in triumph.

The action has started the previous day, just before midnight, when the Highlander was passing along the East Coast, about three and a half miles from land. On hearing a low-flying aircraft, the ship's two light guns were manned and speed increased.

This turned out to be a wise precaution as the aircraft dove into the attack. Machine-gun bullets swept the steamer's superstructure, riddling the funnel and deck fittings and piercing the side. There were no casualties. The aircraft passed astern, circled, and then returned for a second attack, at still closer range.

Read more on DAYS OF GLORY
Posted by Richard at 19:38