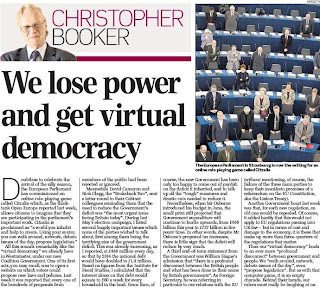 In direct proportion to the degree of detachment from the democratic process, the various institutions which lay claim to be part of our government are expending our money on simulating the very process they are so keen to destroy.

Thus, as Booker remarks in today's column , the EU parliament has commissioned an online role-playing game called Citzalia which allows "citizens" to imagine they are participating in the parliament's "important work".

Citzalia is proclaimed as "a world you inhabit and help to create. Using your avatar, you can walk around, network, debate issues of the day, propose legislation."

Not least of the fatuity of this is that the EU parliament does not propose legislation. It is an absolutely fundamental characteristic of the EU that the commission has the monopoly of proposal, one which actually guarantees its laws are "democracy proof". To remove a law requires another law, which only the commission can propose, thus ensuring that no democratic institution can over-ride it.

For want of real democracy, therefore, all we get is "virtual democracy", much the same as we are already getting from the Cleggerons in Westminster. One of its first acts – as you may recall, says Booker - was to open a website on which voters could propose new laws and policies. Last week it was reported that every one of the hundreds of proposals from members of the public had been rejected or ignored.

It is not only democracy that has gone "virtual", however. So has governance in the widest sense. The Cleggeron corpus, Cameron and Cleggy – two prize "C"s who have acquired the label the "Brokeback Two" - have sent a letter round to their Cabinet colleagues reminding them of the need to reduce the public spending deficit.

This was "the most urgent issue facing Britain today", they said, even though during last May's election campaign, Booker listed several hugely important issues which none of the parties wished to talk about. First amongst them was the terrifying size of the government deficit.

This was already increasing, as Booker reported, at £446 million every day, so that by 2014 the national debt would have doubled to £1.4 trillion. The interest alone on that debt would equate to £60 a week for every household in the land.

Since then, of course, the new "virtual government" has been only too happy to come out of purdah on the deficit it inherited, and to talk up all the "tough" measures and drastic cuts needed to reduce it.

Nevertheless, when little Georgie Osborne introduced his budget in June, the small print still projected public expenditure continuing to hurtle upwards, from £668 billion this year to £737 billion in five years' time. In other words, there is little sign that the deficit will reduce by very much.

Not content with this, though, we get Willy Hague's admission that "there is a profound disconnect between the British people and what has been done in their name by British governments". As Foreign Secretary, he was referring in particular to our relations with the EU (without mentioning, of course, the failure of the three main parties to keep their manifesto promises of a referendum on the EU Constitution, aka the Lisbon Treaty).

Another government boast last week was that, for each new regulation, an old one would be repealed. Of course, it added hastily that this would not apply to EU regulations passing into UK law – but in terms of cost and damage to the economy, it is these that make up more than three-quarters of the regulations that matter.

Thus our "virtual democracy" leads to an ever more "profound disconnect" between government and people, says Booker. We "walk around, network, debate issues of the day", even "propose legislation". But as with that computer game, it is an empty charade.

"Behind their hands, our rulers must really be laughing at us", Booker concludes – but then he is writing for a family newspaper. The reality is much more stark, to the extent that people are increasingly opting out of the political process altogether. But when there is no prospect of influencing that process, and the sole contribution of the political classes is display contempt for their voters, there is absolutely no point in wasting life energy on them.

All we can hope for is that they eventually disappear up their own virtual democracy and we can then get back to real politics, where democracy might have some meaning. Until then, I really am not alone in not wanting to know. They can put their virtual politics where the sun doesn't shine.