The future of Iran 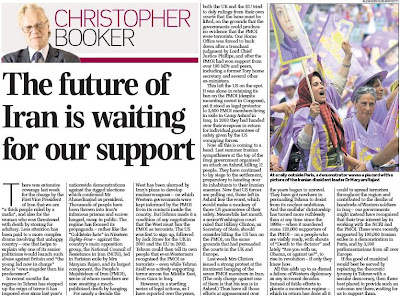 Booker in his column addresses the issue of the PMOI and the continued attempts of Tehran to keep it branded as a terrorist organisation.

What is puzzling though is that this organisation, which is able to attract huge expressions of support from free Iranians and can organise major demonstrations in Paris, seems unable to attract even the interest, much less the support of the western media.

Yet, writes Booker, "If the good of mankind would best be served by replacing the theocratic tyranny in Tehran with a secular democracy, then those best placed to provide such an outcome are there, waiting for us to support them."

And the country least supportive of all is demonstrably our own, which worked closely with the EU in seeking to maintain the PMOI's listing on the EU's listing of terrorist organisations

Such has been the determination of both the UK and the EU to provide succour to the regime in Tehran that one wonders whether there is more to this than meets the eye, more than already has been declared. Some of that might possibly be related to the close economic ties between Iran and India, with the UK in particular keen not to rock the boat.

The one thing about which we can be sure is that, in the region, nothing is ever quite what it seems. But there again, as far as out media is concerned, it doesn't "seem" anything at all. The issue is invisible, another of those which simply does not register.