Is God a warmist? 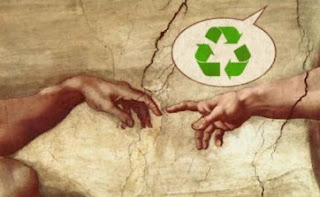 The Methodists – albeit in draft – according to this statement, headed: "Approaching God in the context of climate change", seem to believe:


The theological task is to reflect on modern scientific accounts of the threats presented by climate change in the context of affirming the triune God as creator and redeemer of the universe. The scientific analyses of climate change and the role of human carbon emissions are well-grounded. It is now intellectually and morally irresponsible to fail to acknowledge and address the urgent need for radical cuts in greenhouse gas emissions in order to prevent intolerable damage to human populations and mass extinctions of many plant and animal species.

This is an interesting observation for a sect with its "intellectual" origins in Arminianism. This holds that humans are naturally unable to make any effort towards salvation and can achieve this only through God's grace. It also holds that salvation cannot be merited and no works of human effort can cause or contribute to salvation.

On that basis, it would seem that, unless God is a committed warmist, the Methodists are rather in trouble. As it is, She could just be having an Almighty joke at our expense.