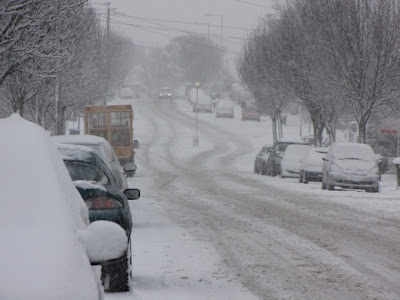 Been at it all day ... meanwhile, forecasters are warning that the snow and arctic conditions are set to continue into the weekend, while southern England is braced to be the “crucible” of the severe weather later today. The renewed wave of bitter weather comes as experts predicted that Britain is facing the coldest winter in 100 years.

The prolonged cold snap has also led to fears that Britain could be confronted with a shortage of gas after the National Grid warned supplies to reduce use of the fuel. It was the second time ever that the move has been taken and came after a 30 percent rise on normal seasonal demand.

This is not surprising, after the hammering that the electricity generators have been giving the gas supply. However, you can see from the latest update that they have eased back on gas and coal is taking a greater load (see below). 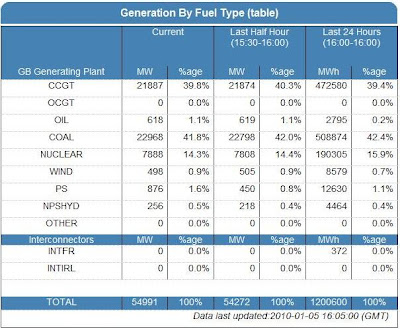 Thus, from a near 50-30 percent split yesterday, coal consumption has upped, giving an approximate 40-40 split, with coal currently the predominant fuel source. The greenies will perhaps be a little disconcerted that this global warming is er ... very bad for global warming, as they toast their little toes to the output of coal-fired power stations.

Wind output has crept up to a staggering 0.9 percent of production (0.7 percent on the 24 hours), increasing the load-factor to about seven percent. One thing for sure, the wind farmers will not be getting rich out of this cold snap. Wait for the weeping and gnashing of teeth as they demand more subsidies.

Needless to say though, The Independent is also trying to hold the line.