The most influential tree in the world 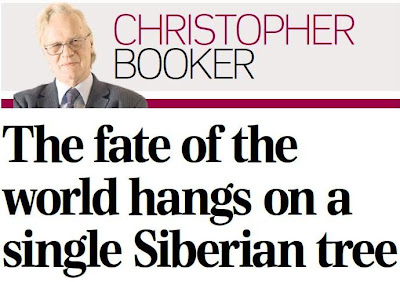 Booker returns to "Climategate" with a vengeance today, retailing the bizarre story of a single tree in Siberia dubbed "the most influential tree in the world".

This is right at the heart of the sound and fury of "Climategate" and has been largely overlooked by the media. The story starts with the "hockey stick" graph produced by Michael Mann in 1999, which instantly became the chief icon of the IPCC and the global warming lobby all over the world, its essential features being to exaggerate the modern warming and to hide the Medieval Warming Period.

But in 2003 Steve McIntyre and Ross McKitrick, showed how the graph had been fabricated by a computer model that produced "hockey stick" graphs whatever random data were fed into it. A wholly unrepresentative sample of tree rings from bristlecone pines in the western USA had been made to stand as "proxies" to give the desired effect.

Although McIntyre's exposure of the "hockey stick" was upheld in 2006 by two expert panels commissioned by the US Congress, the small group of scientists at the top of the IPCC brushed this aside by pointing at a hugely influential series of graphs originating from the CRU, from Phil Jones and Keith Briffa.

These appeared to confirm the rewriting of climate history in the "hockey stick", by using quite different tree ring data from Siberia. Briffa was put in charge of the key chapter of the IPCC's fourth report, in 2007, which dismissed all McIntyre's criticisms.

At the forefront of those who found suspicious the graphs based on tree rings from the Yamal peninsula in Siberia was McIntyre himself, not least because for years the CRU refused to disclose the data used to construct them. This breached a basic rule of scientific procedure.

But last summer the Royal Society insisted on the rule being obeyed, and two months ago Briffa accordingly published on his website some of the data McIntyre had been after.

This was startling enough, as McIntyre demonstrated in an explosive series of posts on his Climate Audit blog, because it showed that the CRU studies were based on cherry-picking hundreds of Siberian samples only to leave those that showed the picture that was wanted.

Other studies based on similar data had clearly shown the Medieval Warm Period as hotter than today. Indeed only the evidence from one tree, YADO61, seemed to show a "hockey stick" pattern, and it was this, in light of the extraordinary reverence given to the CRU's studies, which led McIntyre to dub it "the most influential tree in the world".

But more dramatic still has been the new evidence from the CRU's leaked documents, showing just how the evidence was finally rigged. The most quoted remark in those emails has been one from Prof Jones in 1999, reporting that he had used "Mike [Mann]'s Nature trick of adding in the real temps" to "Keith's" graph, in order to "hide the decline".

Invariably this has been quoted out of context. Its true significance, we can now see, is that what they intended to hide was the awkward fact that, apart from that one tree, the Yamal data showed temperatures not having risen in the late 20th century but declining.

Crucially, though, the "Climategate" e-mails show evidence of collusion and premeditation, involving Michael Mann himself. The month before the "hide the decline" e-mail, Mann had. e-mailed Jones to express his concern that there were discrepancies between his and Briffa's work, both of which were to be published in the IPCC report.

Then, Mann had in mind the famous "consensus", the need for which he emphasised in that e-mail. Past climate estimates had to be "robust" among "a number of quasi-independent and truly independent estimates", he said. Briffa's work was not "robust". It had to be "fixed" – and fixed it was.

What Jones suggested, emulating Mann's procedure for the "hockey stick" (originally published in Nature), was that tree-ring data after 1960 should be eliminated, and substituted – without explanation – with a line based on the quite different data of measured global temperatures, to convey that temperatures after 1960 had shot up.

A further devastating blow has now been dealt to the CRU graphs by an expert contributor to Watts Up With That, known only as "Lucy Skywalker". She has cross-checked with the actual temperature records for that part of Siberia, showing that in the past 50 years temperatures have not risen at all.

In other words, what has become arguably the most influential set of evidence used to support the case that the world faces unprecedented global warming, developed, copied and promoted hundreds of times, has now been as definitively kicked into touch as was Mann's "hockey stick" before it.

Booker adds a few footnotes to the story, which you can read online, with the flood of comments that are already posted.

CLIMATEGATE THREAD
Posted by Richard at 00:42