In the grip of madness 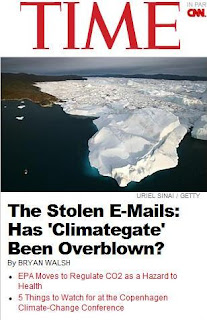 Environmentalists are feeling increasingly hopeful that the Copenhagen summit could produce concrete action on emissions cuts, with U.S. President Barack Obama changing his schedule to arrive on the final day of negotiations. "The clock has ticked down to zero," said the UN's climate chief Yvo de Boer on the first day of the talks. "After two years of negotiation, the time has come to deliver." There's nothing invented about that urgency.

Putting a Union Jack on it, The Daily Mail reported: "'Climategate' dominates Copenhagen talks as Government's top scientist accuses hackers of sabotage." It was a British scientist, of course.

UK climate change secretary Ed Miliband admitted that the e-mail row had been detrimental to the battle to convince people that global warming is a real threat and says there is "a long way to go" to persuade the public. But he branded critics who argue the problem is not caused by humans "profoundly irresponsible", insisting that view flies in the face of scientific opinion.

"The overwhelming consensus of scientists across the world is that climate change is real and is man-made and is happening," he said. "Convincing the public is difficult because the threat is not one that can be seen or felt, he added. "It's not an army massing on our borders and people are focused on other things in their lives."

But then we got to the meat of the issue: "There are also people who want to cast doubt on the science therefore it's not surprising that some people are not convinced. Therefore, we have to redouble our efforts, the scientific community has to redouble its efforts to persuade people," he declared.

Gordon Brown, meanwhile, is pushing European leaders to commit to deeper cuts in carbon emissions in an attempt to seal a global deal. He hopes the EU will agree to cut its output of "greenhouse gases" by 30 percent on 1990 levels by 2020 – a cut 10 percentage points deeper than Europe is currently offering.

We are in the grip of madness.

CLIMATEGATE THREAD
Posted by Richard at 01:09