A dispatch from an occupied country 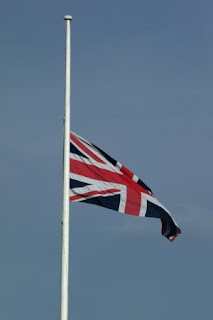 From today, as the Lisbon treaty comes into force, we are no longer masters in our own house. Our prime minister, as a member of the European Council, is obligated under this new treaty to promote the aims and objectives of the European Union, over and above those of the UK, and is bound by the rules of the Union.

Of course, this will make no immediate difference. It simply renders de jure what has been de facto for several decades, but the coming into force of the treaty marks an important symbolic turning point. We are no longer an independent country, de jure. Our prime minister and his government are now working for an alien government, based in Brussels.

In effect, that makes us an occupied country, but the alien creatures that rule us most directly are our own. We are "occupied" by our own political élites, who owe their allegiance not to the people who elected them and pay their wages, but to a more powerful, self-appointed élite in Brussels. They are sock-puppets, with less power than the Vichy government of the 1940s.

No longer will we have general elections to select our own government. All that is afforded to us now is the "privilege" of choosing an electoral college, comprised of people we still call Members of Parliament, who then go on to select the British member of the European Council, a man who is there not to represent us or serve our interests, but to participate in our supreme government.

It is perhaps rather fitting, therefore, that on this day, Mr Cameron's supposi-Tories should be confronting another drop in their poll ratings, attributable in part at least to the Boy's craven surrender to the forces of darkness.

The party is down three points to 37 percent, with Labour unchanged on 27 percent and the Lib Dems up two on 20 percent. This is the second such poll in recent times which indicates that the supposi-tories are unlikely to make a breakthrough and win the prize of nominating their leader as the British member of the European Council.

On current results, there could be a hung parliament after the next general election, a process which we have called an electorally-mandated reshuffle – for the only substantive result is that we change the people we send to our supreme government in Brussels.

Such an outcome is considered by some as undesirable, but it is of little importance. For sure, our provincial government will be able to exercise some residual powers, but over term, they will reduce even more, whoever is elected. Therefore, the results of this coming "reshuffle" are a matter of supreme indifference.

Others, who still seem to care, are put in an impossible position. On one of the major supposi-tory blogs, a commenter remarked: "My prospective Conservative MP is a Europhile 'climate change expert'. You expect me to vote for that? You must be having a laugh." You can see the poor man's problem.

The worst of it is that, in the streets today, nothing will appear to have changed. Everything will look much the same as it did yesterday. In No 10, a man by the name of Gordon Brown will still be calling himself prime minister. In the Houses of Parliament, there will still be MPs and peers, and the Union Jack will adorn the building.

But everything is different. We are a satellite state of the Greater European Empire, ruled by a supreme government in Brussels. And things will stay different until we have regained our freedom. Until then, as I remarked before, we owe this government neither loyalty nor obedience. It is not our government. It is theirs. It is our enemy.