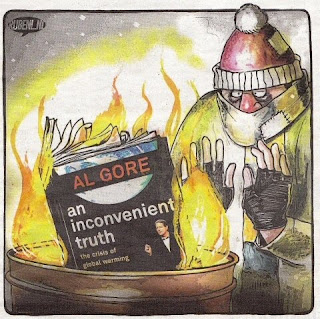 Hard-up pensioners have resorted to buying books from charity shops and burning them to keep warm, we are told. Volunteers have reported that "a large number" of elderly customers are snapping up hardbacks as cheap fuel for their fires and stoves.

One assistant said: "Book burning seems terribly wrong but we have to get rid of unsold stock for pennies and some of the pensioners say the books make ideal slow-burning fuel for fires and stoves. A lot of them buy up large hardback volumes so they can stick them in the fire to last all night."

For those who think fuel poverty is simply an abstract concept, this is the reality. While the fat-cats are tucked up nice and warm. Real people are going cold and not a few will die of hypothermia while they stack on costs with their grandiose schemes for self-enrichment.

At least, though, it looks as if someone has finally found a use for al-Gore. Pity we can't burn the man rather than the book - he looks quite heavily blubbered so his calorific value should be reasonably high.