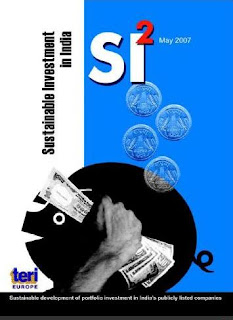 Although – as we recorded in our earlier post - Dr Pachauri's European outpost, TERI-Europe, was formally set up on 10 June 1999, it was not officially launched until 25 January 2000. For that grand event, its suburban home at 27 Albert Grove, in the London Borough of Merton, could hardly have sufficed.

Through the good offices of Ritu Kumar, director and company secretary of TERI-Europe, however, there was a more than adequate alternative. Using her position in the Commonwealth Secretariat, she was able borrow the premises of her additional employer, the very splendid setting of Marlborough House.

And for such an occasion, the chief guest had to be a person of some substance and it says something for the pulling power of this obscure charity that its was able to attract the Rt Hon Mr John Prescott, then deputy prime minister. Whether Dr R K Pachauri was present at the event is not recorded.

From such an auspicious start, Pauchauri's new outpost of Empire went on to attract an impressive array of projects and partners, proudly listed on its own website.

Foremost amongst these, it parades a project which it describes as SI2 - Sustainable Investment in India, which culminated in a report, published under the TERI-Europe brand, in May 2007. This 50-page document, stacked with detail, was entitled: "Sustainable development of portfolio investment in India's publicly listed companies."

The report is interesting for many reasons, not least because the primary author was Ritu Kumar, who must have spent many hours researching and writing it. Then there must have been the costs of design and typesetting, plus the printing and distribution costs.

Yet, in the year of production – TERI-Europe's financial year ending on 20 June – the organisation told the Charity Commission that its income had been a paltry £9,000 and that its expenditure had been a mere £5,000.

If Ritu Kumar had been paid for her work, it cannot have been very much, and the elaborate 50 page SI2 Report must have been remarkably cheap to produce.

It is also remarkable that, whatever were the incidental costs - such as the telephoning Ritu Kumar must have done, her stationery costs and her office sundries - those plus whatever salary she might have been paid and all the other expenses that TERI-Europe carried that year, came to such an exact figure of £5,000.

This, then, points to a profound suspicion about the operation. That it should have declared an income of only £9,000 and a lesser amount for expenses for its financial year ending 30 June had a particular advantage, viz à viz the Charity Commission. Falling below the £10,000 threshold on turnover, this meant it did not have to publish either its accounts or its annual report. Its affairs could be kept away from the prying eyes of the casual public.

The report, incidentally, was co-authored by a certain Dan Siddy. This gentleman is the founder and director of an outfit called Delsus Limited, a "specialist consulting and advisory services for sustainable finance and investment in developing countries and transitional economies", started in 2006.

An issue here is that the report was not a co-production by TERI-Europe and Delsus. It was very much a TERI-branded product. Therefore, his substantial input must have been by way of a donation to TERI – something, of course, Siddy was perfectly entitled to do. And his time would not come cheap.

However, the Charity Commission rules are very clear on the way such donations should be treated. It states that such "incoming resources" should be included in the statement of financial activities, valued at the price the charity estimates it would pay in the open market for such a service.

Thus, we have a situation where the cash equivalent of Siddy's "donation" comes – presumably – within the £9,000 declared income for TERI-Europe in that year.

That, though, is by no means the whole of it as this enterprise was produced with the "generous support" of the Global Opportunities Fund of the UK Foreign and Commonwealth Office. This "support" was announced in April 2006 would, presumably have become payable in the financial year ending June 2007 – all part of the £9,000 income that TERI-Europe declared to the Charity Commission.

If it was included within the £9,000 declared income, the support cannot have been all that generous as the project also had to fund the services of an "Advisory Group". Surprisingly enough, one prominent member was Nick Robins, cited as Henderson Global Investors. No mention is made if his being Ritu Kumar's housemate and co-owner, with her, of 27 Albert Grove, head office of TERI-Europe.

Other members of the Advisory Group were David Gait (First State), Stephen Hine (Eiris), Nandan Maluste (Kotak Mahindra Bank), Ravi Narain (National Stock Exchange) and Suresh Narayan (India Index Services Limited). Then, TERI-Europe had the services of Rochelle Mortier for "initial research in India and UK", plus Rachel Mew of Delsus Limited, and the staff of the Publications Unit at TERI India. All of this, it seems, was funded within that incredibly modest total expenditure for the year of £5,000 - unless, of course, all these services were donated, in which case they must have come within the £9,000 income.

And this was but one project for that year, and there were other years with other projects, again where the income and expenditure was remarkably modest. We will look at some of these in the next part.

PACHAURI THREAD
Posted by Richard at 15:07