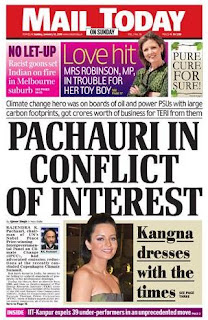 It looks as if the Indian media is taking the "Patchygate" affair seriously, with the New Delhi Mail Today taking on our revered "climate change hero" in a banner, front-page headline story, continued on a full page inside. The story is also online published by India Today.

Relying heavily on our story in The Sunday Telegraph - to which fulsome acknowledgement is given – journalist Ajmer Singh takes as his "line" the fact that Pachauri was on boards of oil and power utilities, with large carbon footprints, and got "crores-worth" (10 million rupees – about £140,000) of business for TERI from them.

Thus does Singh note that while Pachauri had advocated emission reductions at the recently concluded Copenhagen Climate Summit, "back home in India, he seems to be failing to uphold standards of propriety in his professional dealings."

We learn that, during his tenure, first as director from 1982, and then as director-general of The Energy Research Institute (TERI) since 2001, Pachauri was a member of the boards of the Oil and Natural Gas Commission (ONGC), Indian Oil Corporation (IOC) and National Thermal Power Corporation (NTPC), three of India's biggest public sector energy companies, all of whom by the very nature of their business contribute heavily to greenhouse gas emissions. These emissions, according to the IPCC, are adding to the country's growing carbon footprint and hastening climate change.

TERI, in fact, entered into business dealings with these companies and allegedly benefitted from Pachauri's association with them. Pachauri's dealings, we are told, have also been noticed by the international media. Recently, The Sunday Telegraph of London had accused him of amassing a fortune using his links with carbon trading companies. Pachauri dismisses the report as "a pack of lies."

With a certain sense of irony, Pachauri is described as "the climate change hero" and Singh tells us he was an independent director on ONGC's board for three years between June 2006 and June 2009. During that time, he was entitled to first-class air travel when he attended meetings, five-star hotel stays and an allowance of 25,000 rupees for each meeting attended. This was in addition to having a say in the company's decision-making process. It was during this period that TERI had secured business contracts from ONGC.

This practice, writes Singh, is against ONGC's official code of conduct which says: "The directors and management shall act within the authority conferred upon them in the best interests of the company and will use their prudent judgment to avoid all situations, decisions or relationships which give or could give rise to conflict of interest or appear to conflict with their responsibilities within the company."

In his defence, Pachauri says he is now not on the board of any public sector undertaking, then declaring: "What is stated applies only for short periods in the past ... TERI is a not-for-profit organisation working for the welfare of society and its revenues cover costs and provide no private benefit to any party."

Singh is less than convinced. "Pachauri's position is untenable," he writes. As noted on this blog on 29 December, ONGC and TERI launched a joint business venture in March 2008 called ONGC-TERI Biotech Ltd (OTBL). This was while the TERI director-general was on its board. This entity's objective was the "large-scale application of microbial product oil zapper for clean-up of oil spills in farmers’ fields and around oil installations and treatment of oily sludge hazardous hydrocarbon waste."

When asked about this, Pachauri says "The joint venture (OTBL) was established largely at the insistence of ONGC. A decision to set up OTBL was taken only on October 31, 2006, at a board meeting that I did not even attend."

This evokes a somewhat jaundiced response from Singh: "Does that mean he wasn't even aware of the decision to set up OTBL?" OTBL was set up in 2008, and ONGC insiders state that all the work awarded to TERI was on a nomination basis and not through tenders, as is the accepted practice.

Climate change "hero" Pachauri hasn't finished though. He claims that 'TERI has not even charged OTBL any royalty for the technology provided to ONGC and other oil companies in India." Says our hero: "Any funds provided to TERI are purely to cover costs of activities carried out and performed successfully."

Unfortunately (for Pachauri) Singh has been speaking to a senior ONGC official. He confirms that close to Rs 30 crore (about £4 million) was paid directly and indirectly to TERI over a period of time for the execution of projects, which included bio-remediation, pipeline corrosion inhibitors and microbial enhanced oil recovery. OTBL was also involved in these transactions, he said.

Pachauri's response is a classic. He "denies" that TERI received the money, saying that OTBL "... is an independent entity with separate accounts, and any funding received from ONGC by OTBL is separate from any transactions involving OTBL and TERI." And OTBL is owned by?

Intriguingly, Singh notes, ONGC has two specialty labs — Institute of Reservoir Studies (IRS) in Ahmedabad and Institute of Biotechnology and Geo-Tectonics Studies (INBIGS) at Jorhat, Assam — to do what TERI was contracted to do. Both labs were set up to handle high- value, high- end and extremely specialised research.

Thus does Singh write that Pachauri concedes that the decision to set up OTBL was based on the work done jointly by TERI and IRS. "Pachauri may not see this as a conflict of interest, but former minister of state for petroleum and natural gas Santosh Gangwar said he had complained against it."

Gangwar actually demanded an inquiry against Pachauri in a letter I wrote to petroleum minister Murli Deora some time back. "This is a case of conflict of interest on Pachauri’s part. TERI is benefitting from ONGC," he says. Furthermore, the associate director of the environment NGO, Centre for Science and Environment, Chander Bhushan Singh says Pachauri and TERI need to come clean on their conflict of interest dealings with ONGC. 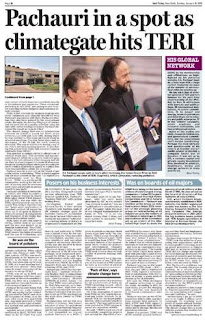 Needless to say, the noble Pachauri does not see it this way. "The presence of any TERI person on the board of a PSU (public service utility) cannot be seen as a conflict of interest just as the presence of a secretary to the government of India on TERI's governing council – which is the case – can be seen as serving the public interest."

On whether the association of anyone from TERI on PSU boards had served any public interest, he claimed: "It is [in] the larger public interest, with no private benefit to any party." Pachauri says projects were awarded to TERI because it served the objectives of PSUs.

In a delicious contradiction, Pachauri then says: "TERI's track record of successfully completing projects and serving the objectives of several PSUs is the reason why these were awarded to my organisation, with several of them going back in time well before I joined the boards of these organisations."

He then adds that, in "certain isolated incidents" he had recused (excluded himself) himself, but goes on to say: "The boards of the PSUs I have been associated with generally consist of over 20 members, and there is no way I could have influenced any decision within this structure even if I was a part of such a decision. "

So, he wasn't part of the decision, but even if he was, he couldn't possibly have influenced it ... honest Guv!

However, the OTBL issue is not unique. Pachauri was also on the board of another OTBL client — IOC — from January 1999 to September 2003. TERI signed a memorandum of collaboration with IOC to treat oil sludge, a waste product thrown up by oil refineries.

IOC uses the TERI-developed oil zapper technology to treat the waste. According to IOC, its mini-utility project for charging solar lanterns was launched in technical collaboration with TERI. Pachauri was also on the NTPC board from 2002 to 2005, and then from January 2006 onwards. In 2006, NTPC and TERI signed a MoU to implement rural electrification jointly through distributed generation schemes.

Under this project, TERI and NTPC identify suitable technology, and then fund and implement appropriate electricity delivery mechanisms.

Unsurprisingly, Pachauri had a reply for this too: "TERI took the initiative of providing that organisation with its biomass gasifier technology to set up power generation in villages that had no access to electricity. TERI did not charge any royalty for the technology developed over decades of research and development and was in fact reimbursed by NTPC sums that were far below costs incurred by TERI."

But, writes Singh, Pachauri's problems run deeper. The Sunday Telegraph of London, in a recent report, claimed Pachauri had established an "astounding worldwide portfolio of business interests with bodies which have been investing billions of dollars in organisations dependent on the IPCC's policy recommendations".

Pachauri's answer to this is: "I haven't pocketed a penny from my association with companies and institutes ... All honoraria I get go to TERI and to its 'Light A Billion Lives' campaign for reaching solar power to people without electricity."

The fact that Pachauri concedes (to us) that he is a "full-time salaried employee of TERI" is not stated here and nor is it noted that the climate change "hero" has not, to this day, revealed the size of that salary. Instead, he is allowed to say: "My dealings are above board."

"The climate change hero is quick with his answers," concludes Singh, "but doubts over his links linger." When our next The Sunday Telegraph story is published, however, there will be fewer "doubts", and a lot more certainty about the nature of Dr Pachauri's money-making enterprises and the payments to TERI.

This is the man who tells us, "no part of these payments is received by me from TERI either directly or indirectly" – despite his being a "full-time salaried employee of TERI", a man living the life-style of a multi-millionare.

PACHAURI THREAD
Posted by Richard at 13:40