Pachauri: another day, another dollar 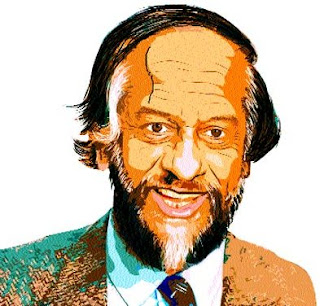 An earnest British citizen, desperate to get in touch with the Asian Energy Institute (AEI) will be pleased to learn that there is a London number they can call, the same one they would use if they were trying to contact TERI-Europe. Conveniently, R K Pachauri's London outpost of Empire in London just happens to represent this organisation in the UK.

No doubt, if pressed, the same R K Pachauri – a "full-time salaried employee" of TERI – will aver that not a single penny goes into his own pocket as a result of his service, but the same cannot be said of TERI. It has benefitted hugely from its association – although the income so gained will have nothing to do with ensuring that the unspecified salary of R K Pachauri is paid on time.

As an illustration of the way things do work, the AEI in the late 1990s managed to tap into one of the world's great milch cows, the European Union, and prevailed upon it to award it a contract to carry out a study on the "Deployment of sustainable energy systems: an agenda for cooperation, 1997-2000."

Cost-conscious taxpayers will be pleased to learn that it was a shoe-string project, which aimed "to capitalize upon research undertaken in European countries in the fields of renewable energy, and mitigation of air pollution, through building knowledge networks between European and Asian counterparts."

Rather than undertaken through tiresome primary research, this was effected through "preparation of discussion papers, workshops and posting all information and papers on a dedicated web site, and also through a newsletter titled Sustainable Energy Systems in Asia." Thus, it only cost a paltry €300,000. As the project was primarily undertaken by TERI, with involvement of four AEI members from China, Bangladesh, Indonesia and Thailand, one must assume that the bulk of this miserable amount of cash went to TERI.

Nevertheless, this points up a – if not the - primary role of the AEI – what is known in the NGO trade as a "funding vehicle". It is a membership organisation with impressive credentials and a worthy background, which can Hoover up donor funding in return for obscure projects. It then distributes it to its members, less a small percentage to cover overheads, in this case that also going to a member – TERI – as it hosts the secretariat.

To be fair, though, TERI, with its full-time salaried director-general R K Pachauri, actually started the whole thing off. It emerged in 1987 from the Asian Relations Commemorative Conference, conveniently – for R K Pachauri - held in New Delhi, India. And, just as conveniently, it recommended establishing an Asian collaborative research entity on energy.

Quick off the mark, the Energy and Resources Institute (TERI) – which just happened to be based in New Delhi - responded by taking the initiative to launch the AEI, supported financially by the Government of India. It has since grown to include representatives from 14 countries in Asia, two from outside the region and 13 associate members. 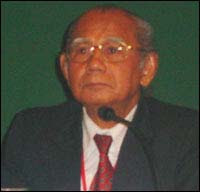 The Institute is registered in India and has "a unique status and a separate bank account." Conveniently – for R K Pachauri – the chairman of its board happens to be Dr Emil Salim (pictured), from Indonesia who, as we noted earlier is also a member of the Asia-Pacific Forum for Environment and Development.

One of its major activities is sponsoring the "Partnership Initiatives for Knowledge Network and Capacity Building" – in conjunction with TERI as a major partner. Salim also has a seat on the Advisory Group on Climate Change for the Asian Development Bank (ADB), which happens to be chaired by R K Pachauri.

Since its inception, the AEI has been remarkably successful in its role as a funding vehicle, attracting funds from the Institute of Policy Studies (IPS), the World Bank, the IMF and the Japan Gas Association. It has received money from the Royal Norwegian Ministry of Foreign Affairs, the Ministry of International Trade and Industry in Japan and the Japanese National Oil Corporation (JNOC) – Big Oil money once again.

Money has also flowed from USAID, the UN Conference on Environment and Development, ECOFUND, CICERO-Norway, DANIDA-Denmark and the Institute of Energy Economics, Japan. Another major donor has been the Rockefeller Foundation, which has as a member of its advisory board a certain R K Pachauri. The Foundation, incidentally, has been quite generous to TERI, recently giving it $200,000 to organise the 2008 Delhi Sustainable Development Summit.

When it comes to inventiveness in developing funding vehicles, however, AEI – under the presidency of R K Pachauri – has clearly acquired some of its master's skills. In November 2005, it became the Asian representative for the Vienna-based Renewable Energy and Energy Efficiency Partnership (REEEP). The secretariat is now conveniently located at TERI's head office in New Delhi.

This is certainly convenient for Dr Ligia Noronha (pictured), the coordinator of REEEP for South Asia. She also happens to be a director of TERI - and the secretary of the AEI. Dr Noronha, incidentally, happens to sit on the external review committee of Shell Oil - more money from Big Oil in the coffers.

British taxpayers will also be pleased to note that the main donor for REEEP is the United Kingdom, our friendly Foreign and Commonwealth Office again. Since its inception in 2003, the UK has contributed nearly £9m, with another £2.5 million in funding for the financial year ending April 2009 - part of a 3-year further financial commitment by the UK.

The organisation also receives financial contributions from Austria, Canada, Germany, Ireland, Italy, the Netherlands, Spain, the United States and the European Union. With such support, this "funding vehicle" had funded four projects in the region up to 2008 and five more projects were under implementation, with an average funding for each of about €0.1 million.

And, of course, the work is undertaken by members, of which TERI is one. Thus, so far, TERI has worked on a "Framework for Renewable Energy Certificate System in Maharashtra" and another REEEP-funded project called "Capacity Building for Regulators and Policy Makers in Andhra Pradesh". In completing these, it was undoubtedly helped by R K Pachauri, who is a REEEP governing board member.

All of this, of course, is perfectly legal and above board – it could hardly be otherwise with British (and US) taxpayers contributing so generously. And not a single penny goes into the pocket of R K Pachauri. Any money which finds its way into New Delhi goes to his beloved institute, from which R K Pachauri gains absolutely no benefit – so he tells us.

One really does wonder, though, how the impoverished R K Pachauri manages to finance his multi-million home at 160 Golf Links, New Delhi, much less buy his $1000 suits and pay his servants' wages.

PACHAURI THREAD
Posted by Richard at 16:55