Mark of the beast 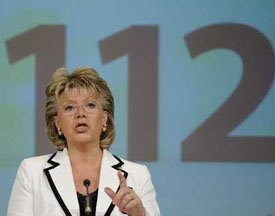 Despite the world going to hell in a handcart, the "colleagues" are still oblivious to the real world and remain fixated with their one and only agenda – European integration. A small but important clue to this comes from EU commissioner for information security and media, Viviane Reding.

You would think that, with what is happening around her would force her to focus on more weighty matters – but not a bit of it. Her current preoccupation is promoting her beloved 112 emergency number, launching yet another initiative to encourage greater awareness.

However, while this might seem unimportant to the point of being trivial, the real agenda shines through in commissioner Reding's statement. Extolling the virtues of the "universal emergency number", she declares:

All citizens have a right to travel throughout Europe as if they were at home. Europe is a space without boundaries, and as a home for its citizens it should create ways for these people to move throughout it in a safe way.

Come rain or shine, financial collapse, destitution, earthquake, war or famine, there is only one EU agenda: reshaping Europe as "a space without boundaries". And, of course, that space must be "managed", which gives the commission and its hangers-on their justification for existing.

Interestingly, we always thought that 666 was the "mark of the beast". It turns out to be 112.