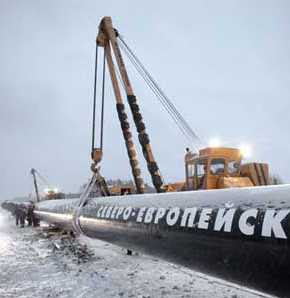 This winter's problems in the gas supply from Russia (and it is still not entirely clear why it took so long to sort out the now customary beginning of the year row) has turned some Europeans' attention to alternative sources of energy. By alternative I mean political as well as technological.

There is the Nabucco pipeline, still in abeyance, though at least one potential source country, Azerbaijan is beginning to get a little impatient. There are various problems but as Vladimir Socor points out, matters are not being helped by Chancellor Merkel's determination to keep the EU's attention and financing firmly on such Gazprom-led projects as Nord Stream.

Strategically, Merkel's demarche seems designed to elevate at least the Russo-German project, Nord Stream, to top-priority level in EU policy and elicit EU funding for this pipeline on the Baltic seabed. Thus far, only Nabucco enjoys top-level political attention and the prospect of funding by the EU. This development is of recent date, following long neglect. Russia's invasion of Georgia and then its suspension of gas deliveries via Ukraine to Europe mobilized the EU into onsolidating the South Caucasus transit corridor for non-Russian gas through the Nabucco project. eanwhile, Russia is unable to finance its part of the Nord Stream and South Stream projects, leaving Germany with the dilemma of covering Russia's investment in Nord Stream through credits or shelving the project altogether.

To amalgamate Nabucco with Nord Stream and South Stream in terms of EU support, as Merkel proposes, would downgrade Nabucco's existing priority level, relegating it to a group of three while elevating those Gazprom-led projects at Nabucco's expense. This could set in motion a zero-sum game for EU funding and political support. The Nabucco project could be compromised in that case. A follow-up commentary in the German press captures the situation in its headline: "Merkel Offends East Europeans" (Financial Times Deutschland, January 30). Those "East Europeans" are, of course, EU member countries from the Baltic to the Black Sea. But the Caspian energy-producing countries would also be left in the lurch in that case.

Our readers will recall Nord Stream. We wrote about it here, referred to the then Polish Defence Minister, now Foreign Minister, Radek Sikorski's somewhat overwrought description of it as the new Molotov-Ribbentrop pact here and alluded to former Chancellor Schröder's questionable role in it here.

Once again, Chancellor Merkel is managing to disprove the otherwise extremely sensible Edward Lucas, who thinks (though not as much as he used to, having been rather disappointed by the EU) that if the 27 manage to create one energy policy they would be able to stand up to Russia's bullying. The trouble is, she sighs, that policy is likely to be Chancellor Merkel's which is all about rolling over rather than standing up.

However, the big news comes from Sweden and it may not turn out to be as big as one hope. (I am waiting for our Swedish correspondent to appear and put me right.) It seems that the Swedish government has agreed to scrap the ban on building new nuclear reactors.

Sweden is a leader on renewable energy but is struggling to develop alternative source like hydropower and wind to meet its growing energy demands. If parliament approves scrapping the ban, Sweden would join a growing list of countries rethinking nuclear power as a source of energy amid concerns over global warming and the reliability of energy suppliers such as Russia. Britain, France and Poland are planning new reactors and Finland is currently building Europe's first new atomic plant in over a decade.

The decision still has to be approved by parliament but there are signs that public opinion has changed since that referendum in 1980 that put an end to nuclear development in the country.