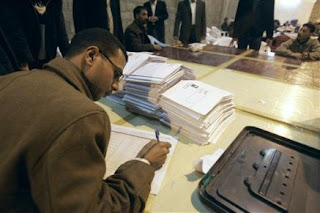 The good news is that Nouri al-Maliki has enjoyed a sweeping victory in the Iraqi provincial elections in Basra. Previously the domain of Muqtada al-Sadr, SCIRI and other nasties, voters have opted for secular and nationalist parties over the fundamentalists. Initial reports are suggesting that Maliki's list has claimed 50 per cent of the vote.

The bad news is that Major General Andy Salmon, commander of coalition forces in southeastern Iraq, is delusional. According to Reuters, the man is telling us that, with the peaceful advent of the elections, British troops in Iraq have largely met the conditions required for their withdrawal and are on track to begin leaving the country by 31 May.

The "peaceful elections," Salmon says, "met the latest of Prime Minister Gordon Brown's goals for removing Britain's 4,000 troops from Iraq by the end of July."

Gen Salmon should perhaps be reminded that Mr Brown's "goals" are of supreme irrelevance. Whether the goals were met, or not, the British are ceasing operations by 31 May and will have to be out of the country by the end of July. That is the case because they have been kicked out.

For Brown, or Salmon, to pretend otherwise, is frankly bizarre. It makes you wonder whether they are truly on this planet. The more worrying thing is that, while Mr Brown is in charge of the country, Gen Salmon is in charge of lots of men with guns. Scary!