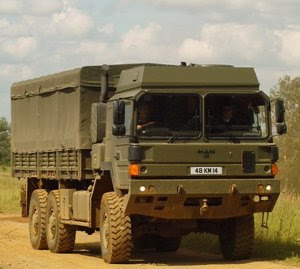 What is the connection between the demise of the troubled van-maker LDV and the British Army?

Well, have a good look at the picture on the left. It shows an Army truck assembled at the Vienna plant of MAN Nutzfahrzeuge Österreich AG in Austria, and you are now seeing some of them – like this one - over here.

The MoD chose these in 2004 to equip the British Army, much to the anger of British bidders, with 5,200 to be delivered between 2007 and 2013. The contract was worth £1.1 billion and, at the time of the order, the MAN website was happily chirping that it "ensures a continuous workload for the Vienna plant and thus helps to safeguard jobs" – Austrian jobs.

In the bidding for the contract, however, the clear favourite was the then US military truck maker, Stewart & Stevenson. It had a combat-proven product which was acknowledged to be better.

Crucially, and here is the rub, it had teamed with UK firms, Multidrive Limited, Lex Defence, and LDV Limited in order to bid for the contract. It intended to build the trucks in Birmingham, giving the contract a high British-design and build component, using one of the LDV plants for the manufacture.

The purchase was made during Blair's "European phase" when he was putting his weight behind the EU's Rapid Reaction Force and this was yet another of those rigged contracts in pursuit of the "European First" defence procurement policy. Such was the enthusiasm to buy the MAN truck (also bought by Eurocorps) that key performance standards were waived.

Thus, according to the National Audit Office, it was not required to meet "Defence Planning Assumptions" and neither was it required to be "capable of operating in world-wide climatic conditions", an interesting waiver, given that it was intended to operate in both Iraq and Afghanistan. That the competition fully met the specifications put them at a disadvantage.

For LDV, the loss of the contract was disastrous. Formerly part of the British Leyland Empire, the company had been saved from closure in 1993 by a management buy-out and in 2002 had put in a bid for the Army support vehicle contract, as part of the S&S consortium, with high hopes of winning. Success would have guaranteed the jobs of at least 600 British workers, directly employed, and many more secondary workers. With the contract now in full swing, would have helped the company weather the recession.

Furthermore, not only would this have given the British Army a high quality, British-built product, it would have presented us with an opportunity to restore military truck-building to the UK, with the prospect of future export earnings from vehicles which would have been combat-proven in Iraq and Afghanistan.

LDV actually claimed that, had the contract been awarded to its consortium, it would also have provided work for 140 suppliers across the country, as well as recreated a strategic UK manufacturing capability in specialised military trucks.

Ironically, Stewart & Stevenson was bought out in 2007 by BAE Systems, so the manufacture would have been a wholly British affair, with taxpayers' money going to British enterprise rather than Austrian truck-builders.

As it was, shorn of any prospects of participating in a valuable £1 billion-plus contract, in 2005 LDV was put into administration and rescued by a venture capital firm, a year later then Hoovered up by the Russian oligarch Oleg Deripaska, owner of the Russian military truck-maker Gaz. He got it for the knock-down price of £50 million, a fraction of what it would have been worth had it secured the MoD order.

In 2007 it posted a £25 million loss – a fraction of what the company would have made building British trucks for the British Army. Now, with the company on the ropes, it is seeking a bridging loan of up to £30 million from the government - which would not have been needed had it secured the MoD order.

The firm, which employed 900 people in Birmingham and supported about 5,000 more in related industries, suspended production in December. All those jobs are now at risk, a particularly savage blow for the run-down Washwood Heath district where LDV is the largest private sector employer. Chairman of the Gaz automotive group, Erik Eberhardson, says the British van-maker had been "surviving on air for the past few days and on the goodwill of the employees".

Meanwhile, the employees of MAN Nutzfahrzeuge Österreich AG are happily building trucks for British soldiers to take out to Afghanistan. There, our troops are fighting for the freedom of the Western world, where there is a noticeable absence of ... Austrian soldiers.

And the Government tonight has ruled out a taxpayer-funded rescue. Having spent all of £1.1 billion on fine Austrian-built trucks for British soldiers, it cannot afford £30 million that is needed to save the jobs of British workers.