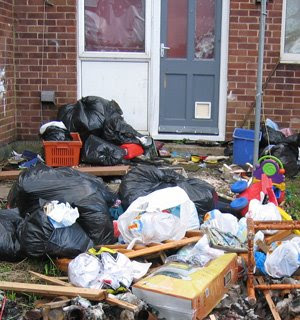 It seems we're rubbish at producing rubbish. In fact, so appalling is the quality of our rubbish that our councils can't even give it away. They are having to make the ultimate sacrifice and bury it in holes in the ground. Not even China wants it any more.

That is the thrust of this piece which tells us that the recvcling system in many councils is so poor that it fails to get a good price in the market. That in turn means those councils have to stockpile rubbish in warehouses and then send it to landfill.

But never mind. Mr Mal Williams, chairman of the Campaign for Real Rubbish, is on the case. He makes the rather obvious statement: "If you collect poor quality material then at the end of day the stuff ends up in landfill sites which is exactly what you are trying to avoid."

He could have saved some words – it's been said better: "Garbage in – garbage out". Put rubbish in your bins, and you will get … rubbish out!

Clearly, we need better quality rubbish. What kind of a nation are we that can't even produce high quality rubbish when Mother Earth is crying? To hell with the recession – that is the least we can do.

On second thoughts, this is definitely one for Captain Euro and the euroweenies. We need a Directive on the Quality Standards for Rubbish. Shall we call it "euro-rubbish"? There's plenty of that about.