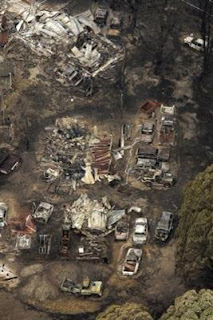 I think that we were all shocked by the ferocity and scale of the forest fires experienced in Victoria, and the appalling number of deaths. In the back of my mind, though, the thought occurred that there was more to it than met the eye – and that turns out to be the case.

Miranda Devine has a piece in the Sydney Morning Herald headed, "Green ideas must take blame for deaths", making it clear that she has no doubts as to where the blame lies.

Her case is persuasive. Not least, she cites Scott Gentle, the Victorian manager of Timber Communities Australia. He actually lives in Healesville where some of the fires broke out and in July 2007 gave testimony to a Victorian parliamentary bushfire inquiry. Then he said:

Living in an area like Healesville, whether because of dumb luck or whatever, we have not experienced a fire … since … about 1963. God help us if we ever do, because it will make Ash Wednesday look like a picnic.

Gentle had complained of obstruction from green local government authorities of any type of fire mitigation strategies. He told of green interference at Kinglake - at the epicentre of Saturday's disaster, where at least 147 people died - during a smaller fire there in 2007:

The contractors were out working on the fire lines. They put in containment lines and cleared off some of the fire trails. Two weeks later that fire broke out, but unfortunately those trails had been blocked up again [by greens] to turn it back to its natural state … Instances like that are just too numerous to mention. Governments … have been in too much of a rush to appease green idealism … This thing about locking up forests is just not working.

The Kinglake area, we are told by Devine, was a nature-loving community of tree-changers, organic farmers and artists to the north of Melbourne. A council committed to reducing carbon emissions dominates the Nillumbik shire, a so-called "green wedge" area, where restrictions on removing vegetation around houses reportedly added to the dangers.

She also tells us that in nearby St Andrews, where more than 20 people are believed to have died, surviving residents have spoken angrily of "greenies" who prevented them from cutting back trees near their property, including in one case, a tea tree that went "whoomp". Dr Phil Cheney, the former head of a bushfire research unit and one of the pioneers of prescribed burning, said that if the fire-ravaged Victorian areas had been hazard-reduced, the flames would not have been as intense.

The communities most affected were built among tall forests of messmate stringy bark trees which pose a special fire hazard, with peeling bark creating firebrands that carry fire five kilometres out. "The only way to reduce the flammability of the bark is by prescribed burning" every five to seven years, Cheney says.

There are other accounts of the malign effect of "green" intervention, such as here, which records how angry residents have accused local authorities of contributing to the bushfire toll by failing to let residents chop down trees and clear up bushland that posed a fire risk.

During question time at a packed community meeting in Arthurs Creek on Melbourne's northern fringe, Warwick Spooner - whose mother Marilyn and brother Damien perished along with their home in the Strathewen blaze - criticised the Nillumbik council for the limitations it placed on residents wanting the council's help or permission to clean up around their properties in preparation for the bushfire season. "We've lost two people in my family because you dickheads won't cut trees down," he said.

Then we get this, where bushfire expert David Packham at Melbourne's Monash University also blames green groups. He says their opposition to controlled clearance in forests known as burn-offs had allowed leaves, bark and dead wood to build up for decades, providing fuel for the fires.

He told The Australian newspaper, "Elements of the (green) movement are behaving like eco-terrorists, waging war against proscribed burning and fuel management."

None of this can be dismissed. You do not have to look very hard to find any number of papers on the causes of major forest fires, not least this one, published by the FAO, this one written in the aftermath of the spate of fires in France in 1995, and this one co-published by global warming evangelists WWF. That one is especially interesting, as it points to the failure of forest management as a primary cause of fires.

Needless to say, the greenies are jumping on the global warming bandwagon but the more prosaic truth is that they, themselves bear a great deal of responsibility for this tragedy.

In the wider context, it is their distorted values which are in turn distorting public policy at all levels. In big and small ways, they are going to kill us all.