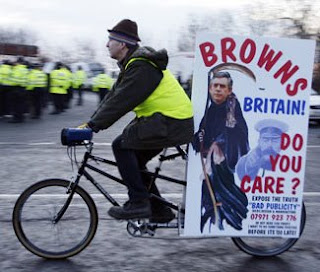 Despite having dropped out of the news recently, the kerfuffle over
British jobs for British workers has not gone away. The continuing effects of commissioner Reding's "space without boundaries" are still too visible.

The latest outcrop of unrest is outside the Staythorpe power station in central England, where around 400 workers have demonstrated over the use of foreign contractors appointed by France's Alstom. A smaller demonstration has also taken place at a plant at the Isle of Grain in southern England, owned by German utility E.ON.

Steve Syson, regional officer for the Unite union, explains: "We've got a situation on the site at Staythorpe where there's potential work available and the UK lads aren't being given proper consideration for that work so there's anger about that."

The Staythorpe project, we are told, has defined rates of pay for local workers under a national agreement agreed by unions with the engineering construction industry. But workers fear a loophole in labour law is being exploited, allowing overseas workers to be brought in and paid less than British workers, undercutting the market.

Much as the politicians would like to bury their heads in the sand, this issue is not going to go away. People are genuinely angry about this and, whatever the tranzie tendency might say, and however much they rationalise their "space without boundaries", when local people see jobs being given to foreigners, while they themselves are consigned to the dole, there is going to be a reaction.

This is not politics – it is human nature. Whatever intellectual, economic or other arguments there might be, it is going to be seen as a black and white issue by those who are most affected.

And the fact is that, whatever the bosses and the corporates – with the backing of the politicos – might claim, when British workers are on the dole while foreign workers are doing jobs they could do, we the taxpayers end up footing the bill. When this displacement effect is taken into account, I somehow doubt that the economic equation looks quite so advantageous.

The trouble is that these external costs are not borne by the enterprises which employ foreign labour, so they do not come into their calculations. They are for the politicians to work out and so far they are diving for cover.

However, "economic nationalism" is a force that cannot be denied. In times of strife, whether you like it or not, employment – like charity – begins at home. But, if the "colleagues" think the "space without boundaries" is so wonderful, perhaps commissioner Reding would like to explain its benefits to the picket line at Staythorpe – without a police escort.