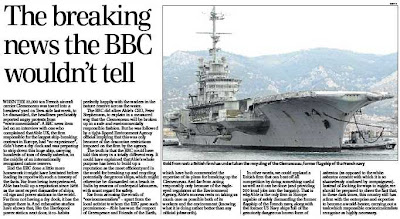 In what is a triumph for British expertise and entrepreneurial flair, last week the 32,000 ton French aircraft carrier Clemenceau was towed into a breakers' yard on Tees-side to be dismantled. But, as Booker reports, the BBC "celebrated" the occasion with a downbeat item, featuring "angry protests from environmentalists".

Thus do we get our news through the distorting prism of somebody else's prejudices and ignorance. News is no longer news any more. Facts are mere material to be moulded and shaped to fit whatever agenda it is that suits the purveyor.

The BBC is, of course, the prime exponent of this black art, another of its efforts today parading the "alarming" news that global warming has been “underestimated”. This is from Professor Chris Field, speaking at the AAAS meeting in Chicago, that temple of enlightened thinking about which we were so fulsome yesterday.

The claim is such utter tosh that one would be loath to expend used toilet paper on it yet, already, Google News already has over 400 reports, all imbibing uncritically at the nipple of junk science. Crap it may be but it fills a space, with The Daily Telegraph, as always, leading the charge. Nothing is real, nothing represents the truth and nothing can be relied upon.

Everywhere you look, there is the same diet of misinformation and half-truths. Venturing into "toy" territory, if you pop over to the MoD site, you will see a happy little story of how the RAF's fifth and final Sentinel R1 ASTOR (Airborne Stand-Off Radar) aircraft has recently returned from successful trials in Afghanistan where it was used to gather information about enemy activity.

Quentin Davies tells us that the ASTOR system "enables our forces to learn about the movement of enemy forces and react to prevent threats to our troops." He then adds: "It is clear to me that we are spending nearly one billion pounds of taxpayers money very effectively."

Now dart over to The Sunday Times and you will see Mick Smith telling us that this "new billion-pound fleet of spy planes … will be out of action until at least the middle of next year because the RAF has failed to train enough crew."

According to Smith, the failure to train sufficient crew and imagery analysts means the RAF will not be able to deploy a Sentinel full-time until 2010. Two crews a plane, making a total of 50 personnel, are required to operate the five aircraft. Ten have been trained.

Nah! The RAF has a £1-billion investment in new gear and it somehow "fails" to train enough crews to man it? We know all about military incompetence but this would plumb new depths, which even our military would have difficulty in reaching. Something else is going on.

Most recently, we heard, the kit in the back had a habit of catching fire when it was switched on – a slightly distressing occurrence when you are sealed in an aluminium capsule miles in the air. Thus, the aircraft could carry out flight trials but was not cleared to take back-seat crews. Hence, no training.

A "toy" story this might be, but it's also a £1 billion our money going nowhere. And the stories were are getting about what is happening to our money are fiction. On the even bigger picture about the trillions draining out of our economy, who knows where the truth lies?

With everything coming through that distorting prism, I guess the only thing we can rely on is that everything and anything presented to us via the media is wide of the mark. Nothing is real, nothing represents the truth and nothing can be relied upon.