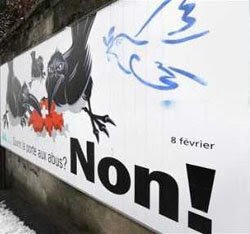 You may have followed, albeit desultorily, the outcome of the Swiss referendum last Sunday. According to most sources, such as this euroluvvy site, Swiss voters have backed giving Romanian and Bulgarians the right to work in their country by a "big majority", with nearly 60 percent in favour of the proposition.

This is taken as Swiss support for EU enlargement – and the EU generally - and a vote against right wing "xenophobia" from the populist Swiss People's Party, the only party to support the "no" campaign.

However, as always, this is not quite what it seems. There was considerable popular opposition to the idea that Romanian and Bulgarian citizens should be the right to work and take social and unemployment benefits in Switzerland. Given the experiences of Italy and others, this was not entirely irrational.

But the point is that, despite the label on the tin, the Swiss were not actually allowed to vote directly on the issue. The political process was rigged to an extent, some Swiss are saying, that would do Robert Mugabe proud. The actual issue on the table was the renewal of the original treaty agreement with the EU, which included many things, but mainly free movement across the border and trade.

When the prospect of Romanian and Bulgarian entry came up, the Swiss had been promised by the federal government that they could have a separate referendum, in accordance which a long-term promise that every EU enlargement would be dealt with separately.

However, when the referendum arrangements came for approval to the parliament, it reversed the government's promise and bundled the treaty renewal with the Romanian and Bulgarian entry question. To have voted against this would have meant that, under a so-called "guillotine clause", all the other agreements with the EU would also have fallen.

In a move similar to the stunt pulled by the Irish government over the Nice treaty, this was, essentially, a coup by the whole political class against its own people. Despite what the headlines are saying, this was not an endorsement of EU enlargement policy in a free and fair referendum.

The result is built on a foundation of lies, threats and misrepresentation. The contempt of the Swiss political class for their own voters has nearly reached EU standards.