The shadow of Auschwitz 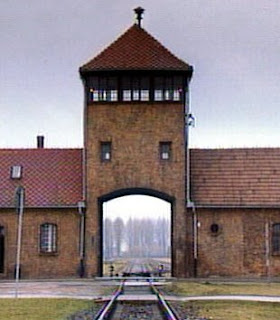 The BBC is informing us that Polish Foreign Minister Radek Sikorski "has urged EU governments to contribute to a special fund to maintain the Auschwitz death camp memorial site."

The camp, where Nazi Germany murdered more than one million people - most of them Jews - now consists of decaying buildings, mostly in need of repair. Poland wants international support for a €120m foundation to preserve Auschwitz.

Sikorski is saying that it was "the last moment to act" to save the site. "If the foundation receives €120m it could use six or seven million euros each year for the conservation of the camp." He adds: "This is really the time to ensure that the last death camp still conserved is maintained for future generations."

With such huge historical overtones and the burden of guilt carried by this symbol of death, it is almost impossible to discuss this rationally. But there has to come a point when questions have to be asked about the historical drag of the Holocaust and how it still dominates modern politics.

What very few people fully understand is the extent to which the doctrine of "preventing another war in Europe" drives the ideology of the EU. We are all used to the oft repeated mantra that the EU kept the peace in Europe for (insert number of years here) but what does not come over is how deeply and seriously this is meant, and what an enormous influence it has on EU politics.

It is that understanding – my understanding – of how deep this vein of history goes – that provoked my earlier reference to Arbeit macht frei in relation to the British purchase of Austrian-built trucks. The reference, for all its emotive overtones, is apposite. The award of the contract was not made on operational or commercial grounds but for ideological reasons.

At the heart of this contract was the deal agreed by Tony Blair and Jacques Chirac in St. Malo in 1998, to build a European Army, the then euphemism being the European Rapid Reaction Force. Anyone who thinks this was anything other than a stepping stone toward the final objective is deluding themselves.

The "colleagues", as with Karl von Wogau, have made their ambitions crystal-clear on this. There is no pretence here, no deception, no cloaking of intentions. They want a European Army. It is their Holy Grail, the final step which must be achieved before the grand experiment of European political integration can be called complete.

If there is any deception it is with our own politicians, who continually and wilfully delude themselves that the "colleagues", who are so clear in stating their ambitions, somehow do not mean what they say. Thus, we have an all-pervading self-deception, where the march towards the European Army is dressed up as "co-operation" and the underlying political agenda is airbrushed away as if it did not exist.

Thus, when it came to awarding the British contract to MAN, our politicians may have deluded themselves that this just a fine gesture, to demonstrate British good faith and our willingness to support European "co-operation". But the "colleagues" see it very differently.

The principle of "synchronisation", about which von Wogau is so enthusiastic, runs deep into the heart and soul of the European "project". This is the fundamental principle whereby, if we are all so heavily synchronised - "interdependent" is another word - we will no longer have the wherewithal to go to war with each other. That is the purpose of European integration, the final cover being to achieve a perfect state of "interdependence".

Thus, more than sixty years after the end of the Second World War, the fear of starting another one is still the main driving ideology behind contemporary European politics. The shadow of Auschwitz looms large in the corridors of Brussels. It is still the dominant force, and drives the project forward during every waking moment.

Thus, when Radek Sikorski evoked the symbolism of Auschwitz, he is appealing to the very heart of the European ideology. But, what he does not realise, perhaps, is that the memorial he seeks to preserve is not in Poland but in Brussels. It should belong in Poland.

Thus, Sikorski should get his €120m to maintain the memorial, so that we never forget. But the corresponding deal is that we should dismantle the shrine in Brussels that is the EU, turn away from its sterile, backwards-looking ideology and get on with our lives. We should look to the future instead of being trapped, perpetually in our past.