In the heart of our democracy 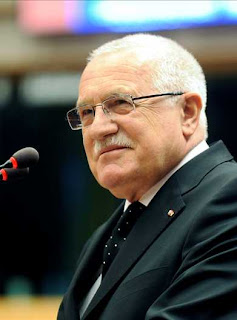 At the risk of turning this blog into a Vaclav Klaus "benefit week", we have to record that, this morning, this fine upstanding man addressed an adoring audience of MEPs at the EU parliament in Brussels.

In something akin to sticking his head into a lion's mouth and then jabbing it in the stomach with a blunt instrument, however, he made the slight tactical error of suggesting that current EU practices "smacked of communist times" when the Soviet Union controlled much of eastern Europe, including the Czech Republic and when dissent or even discussions were not tolerated.

"Not so long ago, in our part of Europe we lived in a political system that permitted no alternatives and therefore also no parliamentary opposition," said Klaus. "We learned the bitter lesson that with no opposition, there is no freedom."

The "colleagues" though were in a forgiving mood, listening intently – between cheers and applause – when he addressed specifically the role of the august House, telling MEPs that, "Since there is no European demos - and no European nation - this defect can not be solved by strengthening the role of the European Parliament."

Bruno Waterfield thought this a storming speech, "the best I have ever heard in that place," he writes. Clearly, many of the honourable members agreed wholeheartedly. As happened in Paris, they were so overcome by emotion and gratitude that, at this point, a large number were forced to leave the chamber to seek fresh air and aid their rapid recovery.

Such are the vagaries of the foreign languages spoken in the House that many of the gasps of delight and approval sounded to some ears like boos – even Bruno was slightly confused for a moment, recording some of them as such.

But it is very clear that they were simply agreeing with Klaus when he told then that, "The most important task is to make sure that debate over problems is not silenced as an attack on the very idea of European integration." There is nothing the members like better than debating over problems, so what they were told must have come as music to their ears.

"We have always believed," he told them, "that being allowed to discuss such serious issues, " and defending everyone's right to present a different opinion - no matter how much may disagree with it - "is at the very core of democracy."

Avril Doyle, a particularly fine example of Euro-MP mindset, according to Bruno, was so evidently appreciative of these fine sentiments that she had trouble modulating her gentle voice and thus overcome only managed to deliver something which Bruno rather unkindly describes as a "screech".

All the poor lady was trying to do was compliment Klaus for his courage in trying to influence a second Irish referendum. But he seems to have misreported her – you can never trust these hacks – having her say: "debate is a recipe for chaos." No democrat like Avril Doyle could possibly have said that.

Anyhow, the Czech media seems well pleased with the respect accorded to their president, although one journalist – like Bruno – seems also to have been confused by the quaint habit of the parliamentarians making cheers sound like boos.

She thus records that the MEPs' reaction to his speech amused (but probably did not surprise) president. How could he be surprised when he received such great approval?

Happily, the EU parliament press service recorded the great event most fully, noting the grateful response of parliament president Hans Gert-Pöttering, who described Mr Klaus's views as "an expression of the diversity in Europe".

Quite rightly, he pointed out that "in a democracy it's the view of the majority that counts". Without the EU parliament, he said, Europe would be in the hands of bureaucrats. And that would never do.

So wise was that comment that the "wide majority of MEPs" – many of them having overcome their emotions and struggled back into the chamber - "strongly welcomed Mr Pöttering's response." Mr Klaus must have been so pleased with his morning's work in the heart of our democracy.