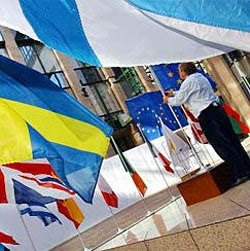 You have to get your enjoyment where you can these days, so at least we can snatch a little hilarity from a report in Deutsche Welle, which records the latest discomfort of the "colleagues".

It seems that so many people in Europe now speak English as a second language that native English speakers have all but given up on learning other tongues. As a result, the EU is finding it harder and harder to find staff to interpret at meetings and translate official documents into English, just at the moment when it needs them most.

EU spokesman Pietro Petrucci complains that, "On the one hand, English is the language which is most in demand for translation and interpretation, but on the other, fewer and fewer English speakers are learning other languages."

Desperate officials have now sent out a call via YouTube for native English speakers to learn more foreign languages so that they can then find a job translating or interpreting in Brussels.

But in most of its new member states, English is by the far the most widely spoken foreign language. This is something the Frogs must hate. In 1997, 45 percent of EU documents were drafted in English. By 2006, the proportion had climbed to 72 percent.

In the same year, commission experts translated over 175,000 pages of official texts into English - the highest number of translations into any EU language, three times as many pages as were translated into major languages such as Spanish or Italian.

Moreover, the commission is facing a crisis. One third of the organization's 70 full-time English interpreters, and one in five of its 111 translators, are set to retire in the next decade. But because Britain and Ireland are notoriously the least enthusiastic linguists in the EU, there is an ever-decreasing pool of talent in which to trawl.

It seems that only 60 percent of Irish school graduates and 35 percent of Brits studied French in their final years at school, while just 18 percent in Ireland and 13 percent in Britain studied German. By comparison, 94 percent of German students, and 99 percent of the French, studied English.

The commission's pleas are likely to fall on deaf ears. Some 85 percent of all school children elsewhere in Europe are now learning English, which means native English-speakers have very little incentive to learn foreign lingos. All the good little foreigners are coming to the realisation that English is the only language that matters, while we can bask in our natural superiority, confident that eventually, they will all fall into line and we will no longer have to shout at them.

The only trouble is that the EU's idea of English is very different from that with which most Englishmen are familiar. Better described as "bureaucratese", it is largely incomprehensible, no matter which tongue is used. Strangely, once you understand some of the key words, the actual language matters very little. You find yourself baffled in all 23 languages if mood takes you.

Perhaps, therefore, the EU would be better off hiring translators for their obscure terminology, and the bizarre meanings they put on familiar words – like democracy. But then, if more people understood what they were really on about, their days would be numbered – and even shorter than they are already.