A collective of greenies 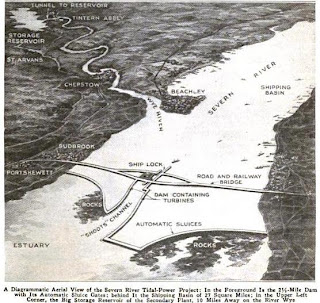 The wonderful thing about being an eco-warrior is that your world vision allows you to see things in black and white … capitalism is baaaad, recycling is goooood, etc., etc., (never mind that one depends on the other). Rather like Conservatives, Europhiliacs and other faith-driven believers, there are no greys.

One tiny problem for those zealots intent on wiping away the tears of Mother Earth, however, is that the closer they get to real-life implementation of their fantasies, the more that problems begin to stack up – the Severn barrage being one classic example.

Here, we learn that this £22 billion monument to greenery is not going to be £22 billion after all. Another £2 billion is needed … to cover green issues. This is necessary, we are told, by a consultant hired by the government, who attributes the sum to the cost of replacing the natural habitats that could potentially be destroyed by the barrage.

The beauty of this is that the requirement to replace habitats comes straight out of the EU's Habitat Directive. This means that, in pursuit of the EU's renewable energy quota, the greenies are running slap into another requirement.

Anyhow, the consultants in question is Peter Kydd, of Parsons Brinckerhoff, who also warns that the compensation package for displaced economic activities would also have to be factored into final costs. Not least is the Port of Bristol, one of the country's largest docks. This would be forced out of its present site. These costs have not been quantified but "could run into tens of billions of pounds."

By the time the two-year consultation process has finished, there is a very real chance that the original cost estimates – themselves uncertain – could have doubled or more, making this scheme even more insane than as at originally conceived, putting the greenies, the climate change believers, economists and just about everybody else in conflict.

All of which rather suggests a new collective noun for the greenies – a "conflict" seems rather appropriate.

The ironic thing is that this scheme has been mooted seriously ever since 1925 (see picture) when an official study group was commissioned. Then it was turned down on economic grounds, only to be reactivated in 1975 when again it was rejected on as not being economically viable.

However, there were more studies carried out in 1979 and 1986 and with the current studies we now have about as many computer-generated simulations as the Airbus A400M.

The only thing that seems to have changed is that the frequency of studies is increasing, a phenomenon which possibly offers a long-term solution. We could launch an endless series of inquiries, locking the greenies in a room and letting them battle it out – while rest of us get on with our lives.